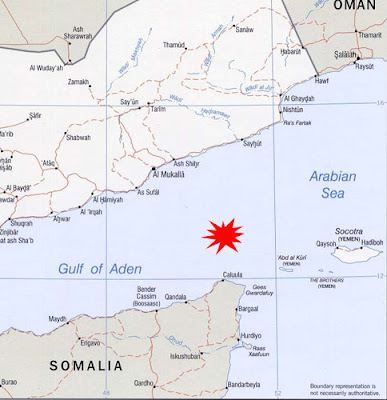 President Nicolas Sarkozy met Tuesday with the families of 22 French crew members held hostage on a luxury yacht for the last five days by pirates off the coast of Somalia, an Elysee official said.

Some 40 members of the hostages' families arrived at the French presidential Elysee palace just after 3:00 pm (1300 GMT), leaving 90 minutes later without making any comment to an AFP reporter waiting at the scene.

As the families were with Sarkozy, the 32-cabin yacht Ponant remained moored in waters near a village, Garaad, on the eastern Somali coast, north of Mogadishu by the self-proclaimed autonomous region of Puntland.
***
A French naval warship was maintaining close surveillance with troops from the French gendarmerie's elite counter-terrorism and hostage rescue unit stationed in nearby Djibouti.

That leaves four among the total reported number of 32 not clearly identified. Initial information after the boat was captured indicated the non-French crew were Ukrainian.

All the crew members were "in good physical condition," the Philippine foreign ministry statement said, adding that there had been no demands made by the pirates at that time.

A senior official said Manila was in close contact with French authorities.

Meanwhile, two separate international piracy specialists said they were sure the group responsible for holding the Ponant were from a local gang known as the "Somali Marines."

In the port of Mombasa, the president of a Kenyan-based anti-piracy centre said the gang is structured along formal army lines.

"They are the best organised group," Andrew Mwangura told AFP. "They have a military background and training, with a very good communication system, lots of weapons and boats, very powerful radios and satellites.

Canada-based journalist Daniel Sekulich, who has spent months in the area researching a book on its pirates, said even if another group originally boarded the ship, it may have been passed on subsequently to Somalia's most feared outfit.

"There are four main groups based in Somalia," Sekulich added. "All have ties to warlords, and are hijacking vessels for ransom.

"With the position where the ship was taken, my guess is that it was taken by another group and then taken to the Somali Marines, because they were afraid that the French navy would attack them."

Sekulich said Somali pirates do not do business themselves, but share out ransoms with warlords who offer protection and businessmen who handle negotiations.

"I think it will be resolved without a gunfight," added the Toronto-based writer.

"A commando attack might look good in a Hollywood movie, but the reality is that in a confined space like this cruise ship, a lot can go wrong."

He thought the pirates would wait, in the belief a rich country such as France would pay out a larger-than-normal ransom.