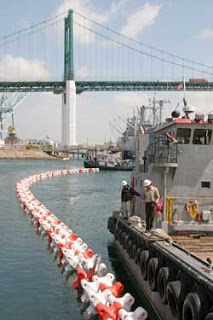 The Port of Los Angeles has a new anti-intrusion barrier paid for with Dept of Homeland Security funds, a reported here

While the foam and steel-cable barrier might not look like much, port authorities say they hope it will serve as a deterrent to small boats that could pose a threat to cruise ships and cargo vessels passing through the port.

"The barrier stops the vessel, then forces it to bounce back," said George Cummings, director of homeland security for the Port of Los Angeles.

"It's not intended to do damage to a boat," he said. "We just want to stop it and keep it from going where we don't want it to go."

Port officials purchased 5,000 feet worth of the barrier with funds from a federal Department of Homeland Security grant, according to port spokesman Gordon Smith.

Port officials said they hope the new security barrier will prevent a terrorist attack like the one in Yemen that killed 17 American sailors and wounded 39 others when a small boat laden with explosives blew a large hole in the USS Cole on Oct. 12, 2000.

"There isn't an imminent threat here, but the cruise terminal could be targeted for an attack, so it makes sense to test out the barrier here," Smith said. "It's also a good place to test the equipment without disrupting terminal operations at the rest of the port."

Port website here. The system is manufactured by WhisprWave, which has the following video on their website: