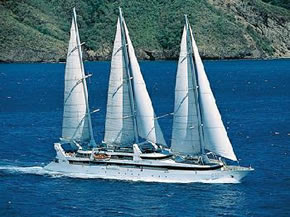 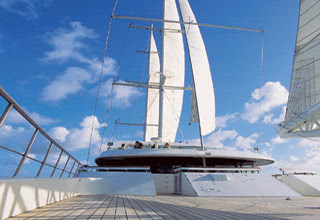 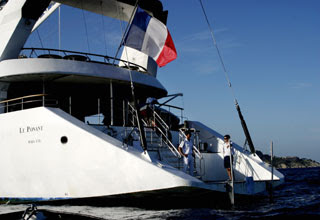 Background here. What to do about the pirated vessel Ponant? One report
suggests, not surprisingly, that a rescue mission is being considered:

"We are in constant contact with the yacht's owners, and the most important thing is to protect the lives of the crew. All options are being discussed, but we will try to resolve this without using force."

Even so, Paris is weighing up the merits of a rescue mission, using a joint US/Canadian/French marine commando unit from nearby Djibouti.

During the radio interview, the minister had declined to divulge any details regarding the plans of the authorities after the activation of France's "Pirate Alert Plan" which the prime minister's office announced Friday.

The plan notably includes placing elite military units trained specifically to intervene against pirates such as the Marine Commandos, including some detachments that are normally stationed on French Navy vessels, and the Paris-based National Gendarmerie Intervention Group on a state of alert.

In addition, the plan, according to French diplomatic sources, requires France to contact allies with a presence or operating in the zone where the specific incident occurred with a view to coordinating efforts.

In his remarks, the defense minister said that Le Ponant, an 88 meters long cruise yacht, was always being closely followed by a French patrol boat, which was operating in the area under the auspices of the United States-led "Task Force 150" anti-terrorist operations.

A suggestion of some limiting factors for the pirates found here:

"We are getting information that the pirates are now moving towards southern coastal area of Garaad where I believe they will stay," said Abdullahi Said Aw-Yusuf, local government official in the area.

"They are well-armed pirates from Puntland region, so they cannot go far beyond Garaad," he added, explaining that the hijackers cannot go south beyond their lair.

I think the official is suggesting support and logistic issues for the pirates. 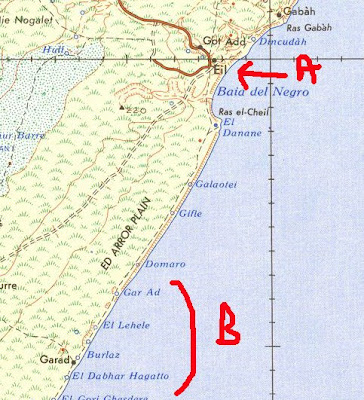 UPDATE2: Latest report has the ship off Eyl:

Local fisherman Mahdi Daud Anbuure told The Associated Press that he had seen the ship arriving at the northern town of Eyl and a small boat headed toward it, apparently with supplies.

On Saturday, the French prime minister said he hoped to avoid using force to free the crew but no options had been ruled out. There are 22 French citizens, including six women onboard. Other nationalities include Ukrainians.

A French frigate, Le Commandant Bouan, was temporarily diverted from NATO duties and was tracking the yacht, military spokesman Cmdr. Christophe Prazuck said Saturday. He added an airplane dispatched from a French base in Djibouti had flown over the yacht and all appeared calm aboard.

Abdirahman Mohamed Bangah, the Minister for Information in the semiautonomous northern region of Puntland, said he hoped international forces "will rescue this ship" at Eyl, about 500 kilometers (310 miles) north of the capital of Mogadishu.

UPDATE3: France has made contact with the pirates, as set out here:

French officials have finally made contact with the Somali pirates who hijacked a luxury yacht on Friday. French Foreign Minister Bernard Kouchner reported only that "we have established contact, and the case may take a long time." He was noncommittal as to whether France would consider a paying a ransom, but did say, "We have to do everything to avoid bloodshed."

Reports from a local fisherman and Abdirahman Mohamed Bangah, information minister for the semiautonomous northern region of Puntland, confirm that the hijacked ship has arrived in the town of Eyl, on the northern coast. Eyl is about 310 miles north of Mogadishu, the Somali capital. 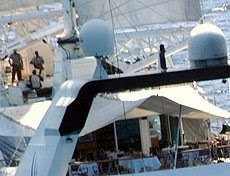 Photo of pirates on captured ship from here. Caption: