Iran: Supplying Gaza with Weapons from the Sea? 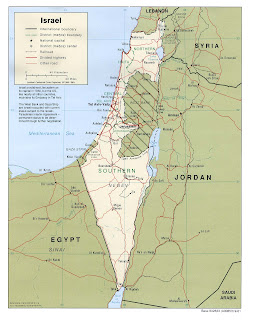 Iran appears to be running a weapon smuggling operation into Gaza using the old ploy of dropping waterproof containers from ships, according to this:

ran has stepped up its efforts to smuggle weapons into the Gaza Strip by using floatable devices that it drops near the waters off the Gaza coast to be picked up by Palestinian fisherman, senior defense officials have told The Jerusalem Post.
[Navy ship catches...]

According to defense officials, Iran is now sending rockets and other advanced weaponry to Hamas and Islamic Jihad in the Gaza Strip by sea as well as via tunnels dug under the Philadelphi Corridor and connecting the Sinai peninsula with Rafah.

Officials said that the Navy is doing a fairly effective job in curbing the smuggling by sea, but that there are some shipments Israeli forces did not succeed in intercepting.

"They throw the weapons overboard in waterproof, sealed tubes which then float into the Gaza waters and are picked up by fishermen," one official said. "Sometimes Navy boats intercept them and sometimes they get through."

In recent months, the IDF has noticed an increase in Iranian-made weaponry in the Gaza Strip, including rockets and mortars. Terror groups in Gaza recently were equipped by Teheran with two different types of mortar shells made in Iran - one 120 mm with a range of 10 kilometers like a Kassam rocket and another with a range of six kilometers. Defense officials told the Post that in recent weeks thousands of mortars have been smuggled into Gaza.
***
In addition to providing weaponry, Iran is also training Hamas and Islamic Jihad terrorists, who have used the periodic openings at the Rafah Crossing with Egypt, as well as the collapse of the border with Egypt in January, to travel to Iran and train there in terror and guerrilla warfare.

Another possible route is that the weapons are transferred by Iran to Syria, and then to Lebanon, where Hizbullah ships them by boat to Egypt.

A branch of the Iranian Revolutionary Guards - called the Quds (Jerusalem) Force - is believed to be responsible for overseas operations, such as training Hizbullah and Palestinian terrorists and providing them with weapons.