6.04.2008: 0640 UTC: 14:02.0N-050:35.9E: Gulf of Aden. A tanker underway was approached and trailed by two, 15-meter long boats. One boat had three persons in it and had a yellow hull. The other boat had five persons in it and had a white hull. Crew alerted and all anti piracy, preventive measures enforced. Ship took evasive manoeuvres. The two suspicious boats moved away and headed in a southwesterly direction. Ship reported to a coalition warship in the area. When warship arrived in the area, the suspicious boats disappeared.

15.04.2008: 0600 UTC: 14:35.8N - 050:55.7E, Gulf of Aden. Three speedboats approached a LPG tanker underway. The boats crossed the bow of the tanker several times. Master altered course and contacted coalition warship in the vicinity. After five minutes the boats moved away and stopped 2.5nm from the tanker.

Some interesting analysis from ONI:

3. GULF OF ADEN: UKMTO advises there have been a number of reports of possible piracy incidents involving groups of small boats, per 17 Apr 08 reporting. Current assessments would suggest that they are more likely to be smugglers than piracy related. The small boats may possibly be attempting to trail larger merchant vessels to avoid radar detection or to create a lee from adverse weather. Is it also possible that suspicious crafts can actually be fishermen attempting to move merchant vessels away from their nets by approaching the ship to make it
change its course. 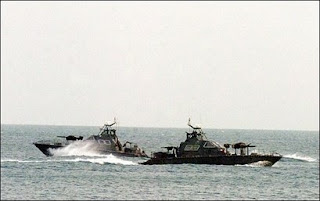 23. SRI LANKA: Sea battle between Sri Lankan army and LTTE 09 Apr 08 at
approximately 1020 local time, Ariyalai point, Jaffna. Armored tanks deployed after observing the presence of about seven LTTE boats in the area. It is believed that the terrorist boats were on a reconnaissance mission, possibly loaded with explosives. The boats were shot at with 100mm fire rounds causing an explosion. Less than an hour later, troops detected one more LTTE boat in the Jaffna lagoon area at about 1120 local time and used heavy fire on it. However, the troops restrained from further firing as the LTTE boat entered a fishing boat area. At least two LTTE
terrorists died during the attacks and one solider received injuries (LM: army.lk).
.
24. SRI LANKA: Sea battle between Sri Lankan Navy (SLN) and LTTE 25 Mar 08 at 0100 local time, off Nayaru seas in Pulmudai. At least one LTTE boat was damaged following a brief sea confrontation with the Navy. According to the SLN, the clash took place in the same area where a Navy Fast Attack Craft (FAC) was destroyed a few days ago. The SLN claimed they
were able to prevent the movement of a cluster of Sea Tiger boats from Nayaru to the Pulmudai area by firing on them using the Navy’s FAC (LM: Ministry of Defence, Daily Mirror).
.
25. SRI LANKA: Sri Lankan Naval Fast Attack Craft (FAC) sunk, personnel missing 22 Mar 08 at approximately 0200 local time off Nayaru on the Mullaitivu coast. A suspected sea mine sunk the FAC and six men were rescued in the vicinity, however, there are ten other individuals missing and feared dead. The LTTE stated there was a confrontation between the SLN and a suicide squad of the Sea Tigers called the Black Tiger suicide squad. The LTTE also
added that all three members of the Black Tiger suicide squad were killed as well. According to the LTTE, the firefight lasted up to 45 minutes. However, survivors of the incident said they did not see any LTTE vessels in the vicinity with the naked eye or electronically and there was no confrontation with the rebel group, suspecting that the sea mine caused the deadly explosion (REUTERS, LM: Thaindian News (IANS)).

As I've said before, the introduction of sea mines into this ugly war may cause more focus to be put on it by the international sea community.
Posted by Mark Tempest at 4/23/2008 07:17:00 AM