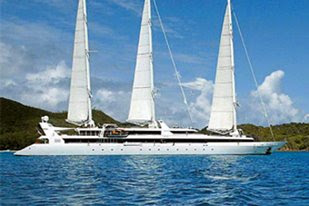 As Maggie noted in a comment below, while I was out trying to do my real job, a report comes in that Somali pirates nabbed another nice bit of ransom material, as set out here:

The crew of a French cruise yacht have been taken hostage by pirates in the Gulf of Aden, off the coast of Somalia, according to the French military and the boat's owner.

At least 30 crew members were reportedly on the 32-cabin, four-deck yacht, named the Le Ponant, when it was taken by the pirates on Friday.

According to officials from the CMA-CGM, a French maritime transport company that owns the ship, the pirates boarded the boat as it returned without passengers from the Seychelles heading towards the Mediterranean Sea.

30 hostages! That oughta bring these brigands some real dough!

No indication as to exactly where the ship was when it was captured...

Yemen said that the French yacht kidnapped by Somali pirates on Friday in the Arab Sea has been hijacked away of Yemen's territorial waters.

Security sources were quoted by the state-run almotamar.net as saying the Yemeni coastguard forces did not receive SOS nor a notice that the yacht was being attacked by the pirates.

The pirates have "moved towards the coastal area of Eyl in Puntland, but I don't think that our administration can do anything to trace that boat because of insufficient access to the area", Bile Mohamoud Qabowsade, Puntland state adminstration officer, told AFP.

"We don't have a word yet from the hijackers and we don't know what they are about to ask, but I believe that those pirates could only be eliminated with the help of the international community," he added.

Despite sophisticated surveillance capacities and a helicopter flying over the 32-cabin, four-deck yacht 'The Ponant' on Friday after it was boarded between Somalia and Yemen, communications remained frozen on Saturday.

"We have had no contact, neither with the crew of the boat nor with the pirates," Defence Minister Herve Morin said on France Inter radio when asked whether there had been a ransom demand, usual practice for pirates operating in the area.

"What normally happens is that the pirates head for territorial Somali waters and it's sometimes after they do that when specific demands are made, which often come in the form of ransoms," Morin added.

He refused to go into the details of the pirate emergency plan, although Prime Minister Francois Fillon pointed on Friday to a "relatively large military means in the area".

However, Fillon also said he would prioritise "the safeguarding of the lives of those on board, therefore all channels of discussion are open in an effort to try and resolve this business".

Morin said about a dozen pirates were involved and that around 20 of the 30-strong crew were French, the rest Ukrainians. There were no passengers on board at the time.

France has its largest foreign military base in nearby Djibouti, and sophisticated surveillance is available to it and a Djibouti-based United States-led multinational force, Combined Task Force 150.

UPDATE3: Eyl Somalia area: Red arrow on map points to Eyl. Circles on first satellite image show (A) compound near Eyl and beach and (B) boats or other buildings on beach. Click on images to enlarge. Judging by the images, there is a shoal area near shore, which the pirates believe will deter major warships from coming too close to the beach. 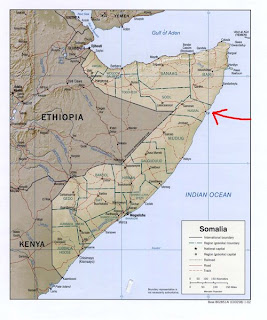 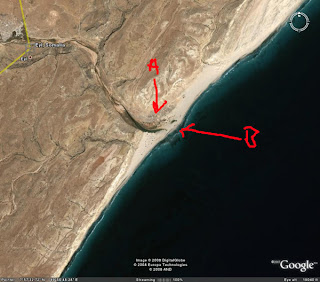 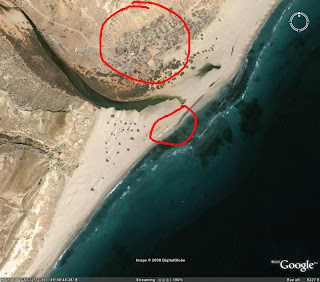 The Defence Ministry said it sent a small warship, the Commandant Bouan,

to shadow the boat, which was seized in open seas and has since been taken to Somali waters.

Mr Morin said Somalia had agreed to let the French navy enter its waters and added that additional frigates were being sent to the scene.