Despite protestations by the French that their recent foray into Somalia to grab a few pirates resulted in no civilian deaths, some in Somalia not only disagree but are demanding compensation, including for the truck the French sniper took out. All this reported here:

They said three herdsmen were killed during the operation that followed the release for ransom of a 30-strong luxury yacht crew and insisted four of the suspects captured by French troops weren't pirates.

"We are not complaining about the operation against the pirates, but we are talking about civilian casualties," said Abdiaziz Yusuf Harin, Puntland's Jariban district commissioner. "Three herdsmen died in the area during the raid."

Harin also demanded compensation for a vehicle destroyed during the raid, saying it didn't belong to the pirates. The official didn't specify the amount of compensation being sought.

Officials from Somalia's semiautonomous northern region of Puntland said only two of the six suspects captured were pirates.

"They arrested six people whom we heard are awaiting trial, but we can confirm that four of them are innocent," Harin said. "They were not involved in piracy.

"There are two people confirmed to be pirates among the six. The other four were khat (mild narcotic leaves) traders selling their goods to the pirates," when they were snatched, said Dahir Abdulkadir Ahmed, the governor of the Mugug region where the operation was carried out.

"We call on the French government to release the innocents and charge the two pirates," he said.

Judging by the terrain, if three goat herders were killed in that area, they must of been the three unluckiest men then alive to be in that area at that exact time. 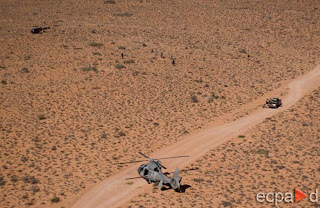 I note that instead of hanging the pirates from the nearest yardarm, France is waiting for Somali permission to try the pirates in France on charges of "organized criminality." As previously noted here, these pirates were taken in Somali territory and not the high seas, although seemingly with the permission of some form of the local "government."

Under United Nations Convention of the Law of the Sea (UNCLOS) Article 105:

Lawyers will begin picking apart this matter under "international law" - pointing out that France did not apprehend the pirates on the high seas. UNCLOS defines "high seas" in Art. 86 as

I assume the argument will be made that France's arrest was illegal.

France, on the other hand, can assert they had permission to be there, that the "arrest" had to be on the beach for the protection of the hostages, and that in point of fact, that part of Somalia is in the words of Art 105, "outside the jurisdiction of any State."

Who's going to punish France if it does?

The yardarm would have been easier.

UPDATE: Apparently the official Somali government is willing to cede responsibility for its territorial waters, as set out here:

Somalia's President Abdullah Yusuf Ahmed said Wednesday he would authorize international measures to fight pirates on high seas that have seized relief goods and recently a French luxury ship and passengers off the Somalian coasts. Ahmed attended a UN Security Council's debate on ways to help the African Union in its missions of peace throughout the continent. He said his war-torn country is confronted with too many internal problems.

"Since Somalia cannot at the moment guard its vast coast, we would want to authorize the international community to take action and combat piracy at the high seas of Somalia until we can effectively undertake the security of our territorial waters," Ahmed said.

The French government has proposed a naval group to deter attacks by pirates off the Somalian coasts, where pirates seized the luxury ship.

Somalia officials previously had asked the U.S. to help patrol its Exclusive Economic Zone for violations by international fish poachers, as set out here. See also this post and the links therein.

Further indication that Somalia has ceased to exist as a state can be found in this quote:

He also called for the deployment of a UN peacekeeping force with the mandate to help Somalia's transition government achieve "fuller reconciliation, stablization, disarmament and durable peace."

The UN force would also help Somalia in forming security institutions for the government, including police and intelligence.

If you don't control your shores or your interior, what are you?

UPDATE2: VOA has a series on "failed states" here, here,here, and here. As usual, the liberal answer is to dump money on them.

"There are businesses out there that are successful, but a lot of the time, they had to get a road built by the government in order to make sure they had the infrastructure," he said. "They had to get a fiber-optic built. They had to get bridges built. So I think assistance does help these countries become less failed, if you will, and prosperous."