The ship's owner, the Compagnie Générale Maritime, has been assured that the crew members, including six women, are being treated well. The Somali "marines" have a reputation for courteous treatment of their hostages, so long as they are confident that a ransom will be paid. Andrew Mwangura, president of a seamen's aid association in the Kenyan port of Mombasa, said: "The size of the ransom depends on the value of the ship, its proprietor and the nationality of the crew. In this case, they will ask for a fortune, millions of dollars, and then lower their demands and everything will go well."

Mr Mwangura said there were four, rival groups of pirates operating from the Somali coast but Le Ponant was almost certainly in the hands of the Somali "marines".

They are the best organised," he said. "They have an almost military structure and training, plenty of weapons and boats, and excellent communications." 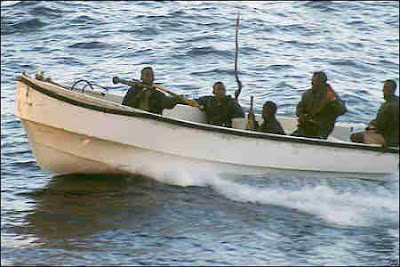 A French journalist, Gwen Le Gouil, was held for eight days by the "marines" in December. He said they were "former fishermen, who have converted to illicit operations of various kinds, including hostage-taking and trafficking in people, money and archeological remains. They have no particular political allegiance. Only money counts as far as they are concerned."

Supplies are being provided to the pirates for "humanitarian" reasons, it is reported here:

Fresh supplies been delivered to hostages and kidnappers on a luxury yacht held for the last six days by pirates off the coast of Somalia, a local rights group said Wednesday.

"We have provided water and food, which the boat needed, and we will continue to give them what we can," Mohamud Abdulkadir 'John' of the Somali Tribal Rights Watch (STRW) organisation told AFP.

At the pirates' request, the 32-cabin Ponant was given the essentials it needs for them to bed in during lengthy ransom negotiations.
***
"The pirates asked for food and water and we gave them what they wanted on humanitarian grounds," the representative said. "For now, we have nothing to do with this business beyond a humanitarian involvement.

"The hostages are not ill and they have not been threatened by their kidnappers. We will continue to monitor their humanitarian needs," the man added.

Another member of the non-governmental organisation told AFP that the abducted Ponant crew was "in good spirits".

This "rights group" language translates into "Don't kill us for helping the pirates" in my view.

Meanwhile, a cart gets put before the horse in a look at the success of the World Food Program revived shipping program, set out here:

Pirates who hijacked ships delivering food aid off the Coast of Somalia could have been kept at bay, thanks to a United Nations Security Council resolution.

The World Food Programme (WFP) and Somalia are upbeat over smooth delivery of relief food since last November after the UN introduced military escorts for ships to the war-ravaged nation.

Last week, military chiefs celebrated the success of food deliveries to Somalia in Mombasa where the Danish handed over the mantle to protect WFP ships to the Dutch.

Sorry, the UN Resolution didn't stop diddly-squat. It is those warships that put an end to the lucrative racket of capturing and ransoming the WFP ships over and over again. Providing some regularly scheduled voluntary military escorted convoys for some of the more vulnerable ships and yachts transiting through the Gulf of Aden would slow down the northern Somali pirates, too.