During World War II, all major combatants used submarines to transport cargo, personnel and weapons. The Japanese furthered the development of "submarine aircraft carriers" ( such projects were also tried after WWI by the U.S., Great Britain and others (see here). As noted in a previous Sunday Ship History here, the Japanese did launch attacks on the U.S. from one of their submarines. For some more information on submarine aircraft carriers, see here. Video of such a boat and a plan for attacking the Panama Canal (in Japanese and a little herky jerky):

In addition, the Japanese built several other special use submarines, as set out here:

Japanese submarines had great success early in the war, especially in the Indian Ocean area. But the tide of battle began to turn with the Allied invasion of Guadalcanal in August 1942, and the Japanese pulled submarines off combat duty and assigned them to carry vital supplies to beleaguered troops or to pull troops out of failing campaigns. The Japanese built submarine landing ships and 28 cargo submarines.

Some of these cargo subs, carrying interesting cargo ("In March 1944...I-52...picked up a cargo of 290 tons of strategic materials, including 228 metric tons of tin, 2.3 tons of opium, three tons of quinine, tungsten, 54 tons of rubber, and two tons of gold, in Singapore...") were sunk by the Allies. Even these were not a new idea - Simon Lake, inventor of the "even keel" submarine proposed in 1917 building up to 100 7500 ton "cargo submarines", as set out here (pdf available for free download). The concept has not died. In 1972, the Naval War College Review featured "The Cargo Submarines: Its History and Possible Applications" a research paper by Franklin C. Varley, described in this abstract:

...past efforts toward the use of submarines as cargo transports; and briefly looks at possible applications, both civilian and military, of a cargo carrying submarine. The intent is to introduce broad concepts into the Naval War College arena for amplification and refinement. Cargo submarines are found to be technically and economically feasible under certain conditions and have important civilian and military applications in an environment of rapidly depleting petroleum resources.

Following WWII, there were many grand concepts of the use of giant submarines. According to Norman Polmar, in his piece "The First Soviet Giants," the Soviet Navy at least designed some big subs to act as undersea LSTs:

In 1948 the design bureau TsKB-18 (later Rubin) developed a draft design for Project 621 - a landing ship-transport submarine to carry out landings behind enemy lines. This was to be a large submarine with a surface displacement of some 5,950 tons. This underwater giant - with two vehicle decks - was to carry a full infantry battalion of 745 troops plus 10 T-34 tanks, 12 trucks, 12 towed cannon, and 3 La-5 fighter aircraft. The troops and vehicles would be unloaded over a bow ramp; the aircraft would be catapulted, with the launching device fitted into the deck forward of the aircraft hangar. Both conventional diesel-electric and steam-gas turbine (closed-cycle) power plants for both surface and submerged operation were considered for Project 621.

TsKB-18 also developed the draft for Project 626, a smaller landing ship-transport ship intended for Arctic operations. The ship would have had a surface displacement of some 3,480 tons and was intended to carry 165 troops and 330 tons of fuel or four T-34 tanks for transfer ashore.

The Soviets had other ideas for such large subs including mine laying. According to Mr. Polmar, the U.S. also had some large submarine thoughts: 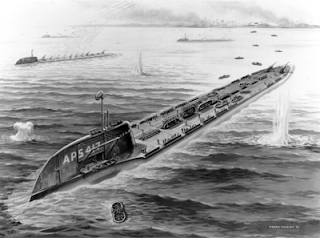 The U.S. Navy also undertook preliminary sketches of submarine LSTs, but never pursued the concept to the extent of the Soviet design efforts. This is artist Frank Tinsley's impression of a submarine LST produced in the 1950s for Mechanix Illustrated magazine and presented to the Navy Department. This was a 10,000-ton submarine, 720 feet long, with a beam of 124 feet that could carry 2,240 Marines, landing them by "amphibious flying platforms" that could move at 100 mph.

The "Giant" ideas seem to have evaporated, though some of their ideas may have been incorporated in the U.S. Navy's SSGN

* TRIDENT stealth and reliability, with more than 20 years of service life remaining for each SSGN
* Large-volume precision strike, with up to 154 Tomahawk and Tactical Tomahawk cruise missiles
* Sustained Special Forces operations to include insertion, extraction, and support of 102 Special Forces personnel, conditioned and ready, with onboard periods much longer than on SSNs
* Command center for mission planning and execution
* Capacity for conducting other SSN missions, such as: intelligence, surveillance, reconnaissance, and targeting; anti-submarine warfare; anti-surface warfare; and mine warfare
* High-data-rate connectivity and joint command/control capability with a “Virginia-class” advanced SSN radio room and ISR suite
* 67 percent operational availability by using two crews to achieve a continuous, 2.4-ship deployed presence in support of Combatant Commanders' mission requirements
* 20 times the payload of an SSN, with large ocean interfaces (22 seven-foot diameter launching tubes, two for SOF lock-out), opportunity for payload experimentation and development 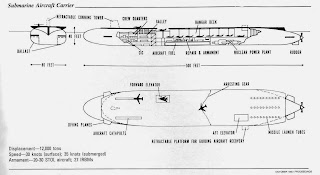 Others have noted "plans"(?) for "submarine aircraft carriers" as set out by Murdoc a couple of years ago here. Murdoc does have some thoughts on this idea:

The flight deck would be about 413 feet long 81 feet wide ( 809 pixels by 158 pixels). By comparison, Independence-class light carriers from World War 2 had flight decks 552 feet by 73 feet and they were not really usable for fixed-wing aircraft in the post-war period as the first jets were coming on line.

And can you imagine the sonar signature of this puppy when submerged? The whole idea behind submarines is that they hide underwater and cannot be found. And it says it has a submerged speed of 35 knots. Who do they think they're kidding? Cavitating props? Super-cavitating props? How about super-duper-cavitating props? Kids building sandcastles on the beach could probably hear this thing rumbling past.

Others, like the author of
Aircraft and Amphibious carriers must submerge to avoid SSC destruction also imagine very large submersibles, including what is purported to be a Chinese design twin hull submarine aircraft carrier. He also has a very interesting collection of images at this post connected to his vision of the future of the 21st Century Navy.

There are many practical uses of submarines. They can be the sea lane protectors or disruptors, stealth ships and littoral combat platforms. They are exceptionally effective at many missions, but it does seem that many of the really BIG ideas thought up in the past have remained shelved for good reason.

But let us salute the dreamers from whom we gain much, even if it only knowing what direction we may not want to head.