Somali Pirates: Not Home in Eyl? 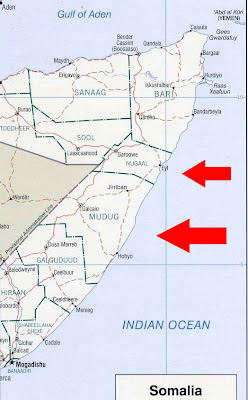 Updating prior reports here and here. The good mayor of Eyl, seeking, I guess to bolster tourism for his town, denies that the captured French cruise yacht has anchored off his town, it says here:

Abdullahi Said O’Yusuf, the mayor of Eyl, told Radio Garowe on Monday that the hijacked French yacht had passed Eyl and headed south towards coastal waters off the region of Mudug, in central Somalia.

Western news agencies reported that the French yacht and its 30-member crew had docked near the coastal village of Eyl.

But Mayor O’Yusuf, who reached the Puntland capital city of Garowe today, repeatedly denied the widespread reports, saying that the townspeople of Eyl would “not allow” the pirates to dock near their small fishing village.

One can safely assume that the French Navy and the other Coalition forces have "perfect knowledge" of where Le Ponant is.

An interesting unconfirmed side note in the article:

Unconfirmed reports emerging from the region of Mudug said the hijacked ship had reached a small coastal town in the village, where armed villagers engaged the pirates in a skirmish that killed at least two people.

Clan elders in Mudug contacted by Radio Garowe said they had heard of the report, but declined to comment until they reach the remote location for confirmation.

UPDATE: A report that an "elite" French force is being sent to the area:

Elite French troops were headed to East Africa to bolster efforts to free captives of a yacht held by pirates off Somalia, a French Foreign Ministry spokeswoman said Monday.

A team of the GIGN, a commando force that conducts anti-terrorist and hostage rescue operations, was being sent to Djibouti to "reinforce" negotiation teams in place, spokeswoman Pascale Andreani said in an online briefing.
***
French officials made contact with the pirates overnight.

"We had confirmation that the crew was safe and sound and well-treated," Andreani said.

"Our priority is the safety of the hostages," she said.

Interestingly, the article ends with a plea for action from a regional Somali official:

The governor of the Somali region of Bari, where the yacht is being held, was quoted in Monday's Le Figaro as urging an attack on the pirates by French and U.S. warships. Musa Ghelle Yusuf urged an attack "for the peace of Somali waters."

He ia not alone in his request, as noted here:

Somali officials on Monday urged tough action against pirates holding a French yacht after an elite French army unit was placed on standby to intervene if negotiations failed.

The local governor in Somalia's breakaway northern region of Puntland, Musa Ghelle Yusuf, said he would be "happy ... to see the pirates killed."

"The French and American ships must attack the pirates. They have our blessing," Ghelle told AFP by phone, adding that the hijackers have been encouraged by ransoms paid in previous ship seizures.

"These pirates are terrorists and there is no need to negotiate with them," Guelleh said. "Attacking them will solve future piracy plans."