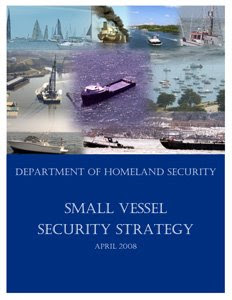 The complete stratgy, in pdf format, can be viewed here.
From the Foreward:

Law enforcement agencies face the challenge of distinguishing between the vast number of legitimate vessel operators and the relatively few individuals engaged in illicit activities. The challenge is immense, as it involves nearly 13 million registered U.S. recreational vessels,2 82,000 fishing vessels, and 100,000 other commercial small vessels. On any given day, a considerable number of these boats share waterways with commercial and military traffic, operating at hundreds of U.S. ports and in the immediate vicinity of critical maritime infrastructure, including bridges and waterfront facilities such as petrochemical plants. More information concerning small vessels is needed to improve the proper assessment of the risk posed by these vessels. The challenge is to balance the collection of requisite information necessary for proper assessment of risk posed by these vessels, with the freedom of the seas expected by the small boating community.

Some analysis of the stratgy here:

As boating season approaches, the Bush administration wants to enlist the country's 80 million recreational boaters to help reduce the chances a small boat could deliver a nuclear or radiological bomb along the country's 95,000 miles of coastline and inland waterways.

According to a Wednesday intelligence assessment obtained by the Associated Press: "The use of a small boat as a weapon is likely to remain al-Qaeda's weapon of choice in the maritime environment, given its ease in arming and deploying, low cost, and record of success."

While the United States has so far been spared this type of strike in its own waters, terrorists have used small boats to attack in other countries.

The millions of humble dinghies, fishing boats, and smaller cargo ships that ply America's waterways are not nationally regulated as they buzz around ports, oil tankers, power plants, and other potential terrorist targets.
***
The United States has spent billions of dollars constructing elaborate defenses against the giant cargo ships that could be used by terrorists, including strict regulations for containers and shipping.

"When that oil tanker is coming from the Middle East, we know everything about it before it gets here," said John Fetterman, deputy chief of Maine's marine patrol. But when it comes to small boats, he said, "nobody knows a lot about them."

The only way to police the waterfront, said maritime security expert Stephen Flynn, "is to get as many of the participants who are part of that community to be essentially on your side." Flynn, a fellow with the Council on Foreign Relations, said treating boaters as allies instead of a threat would go a long way.
***
Allen says the boater who is on the water every weekend knows where people fish and when a boat near a piece of critical infrastructure looks out of place.