To all my college friends who loved Cuba then, for its Castros and Che, a sharp does of reality from President Bush (h/t Jay Nordlinger at NRO) here:

One of the great success stories of the past century is the advance of economic and political freedom across Latin America. In this room are officials representing nations that are embracing the blessings of democratic government and free enterprise. And the United States is proud and active to work with you in your transformations.

One country in our region still isolates its people from the hope that freedom brings, and traps them in a system that has failed them. Forty-eight years ago, in the early moments of Cuba's revolution, its leaders offered a prediction. He said -- and I quote -- "The worst enemies which the Cuban revolution can face are the revolutionaries themselves." One of history's great tragedies is that he made that dark prophecy come true.

Cuba's rulers promised individual liberty. Instead they denied their citizens basic rights that the free world takes for granted. In Cuba it is illegal to change jobs, to change houses, to travel abroad, and to read books or magazines without the express approval of the state. It is against the law for more than three Cubans to meet without permission. Neighborhood Watch programs do not look out for criminals. Instead, they monitor their fellow citizens -- keeping track of neighbors' comings and goings, who visits them, and what radio stations they listen to. The sense of community and the simple trust between human beings is gone.

Cuba's rulers promised an era of economic advancement. Instead they brought generations of economic misery. Many of the cars on the street pre-date the revolution -- and some Cubans rely on horse carts for transportation. Housing for many ordinary Cubans is in very poor condition, while the ruling class lives in mansions. Clinics for ordinary Cubans suffer from chronic shortages in medicine and equipment. Many Cubans are forced to turn to the black market to feed their families. There are long lines for basic necessities -- reminiscent of the Soviet bread lines of the last century. Meanwhile, the regime offers fully stocked food stores to foreign tourists, diplomats and businessmen in communism's version of apartheid.

Cuba's rulers promised freedom of the press. Instead they closed down private newspapers and radio and television stations. They've jailed and beaten journalists, raided their homes, and seized their paper, ink and fax machines. One Cuban journalist asked foreigners who visited him for one thing: a pen. Another uses shoe polish as ink as a typewriter ribbon.

Cuba's rulers promised, "absolute respect for human rights." Instead they offered Cubans rat-infested prisons and a police state. Hundreds are serving long prison sentences for political offenses such as the crime of "dangerousness" -- as defined by the regime. Others have been jailed for the crime of "peaceful sedition" -- which means whatever Cuban authorities decide it means.

Forty-five years ago the world was at the brink of nuclear war when Cuba allowed/invited the Soviet Union to place atomic weapons on Cuban soil. The Navy was called on to quarantine Cuba and interdict any shipping that might be carrying missiles or warheads for Cuba, as set out here:

Reports of the arrival of large numbers of Soviet technicians and military personnel, the construction of larger launch complexes, and the extension of airstrips to accommodate high-performance aircraft pointed unmistakably to the rapid development of Cuba into a Soviet base for offensive action against the United States. Descriptions of suspicious cargoes aboard Cuba-bound ships, obtained from sources at ports of loading and unloading and from aerial photographs taken by Navy reconnaissance aircraft, together with information on vehicle and rail convoys gathered from Cuban informants, strongly indicated the preparation of missile sites of other than the surface-to-air variety Which had been under surveillance for some time.
***
Although military contingency considerations toward Cuba had their genesis long before, on October 1 Secretary of Defense Robert McNamara met with the Joint Chiefs of Staff (JCS) to discuss the circumstances under which military action against Cuba might be necessary and toward which our military planning should be oriented. The following day, the Secretary sent a memorandum to the Joint Chiefs of Staff suggesting six contingencies; among them were (a) evidence that the Castro regime has permitted the positioning of Bloc offensive weapon systems on Cuban soil or in Cuban harbors and (b) a decision by the President that affairs in Cuba have reached a point inconsistent with continuing national security."

U-2 reconnaissance photographs of Cuba positively identified three medium-range ballistic missile sites at San Cristobal. This was the first photographic intelligence of the area since August 29, at which time there was no evidence of any such development. 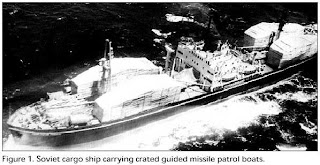 More U-2 photographs taken the day before were developed and analyzed. They further confirmed the existence of strategic missiles and sites in Cuba. Two additional U-2 flights made during the day not only reconfirmed the San Cristobal sites, but also showed two intermediate-range ballistic-missile sites under construction at Guanajay, where there had been no deployment activity on August 29.
***
Atlantic Fleet forces already were at a high peak of readiness because of a heavy schedule of training operations which were underway.
***
The quarantine proclamation had been completed and the OAS and UN resolutions were prepared. Mr. Pierre Salinger (White House), Mr. Robert Manning (State), and Mr. Arthur Sylvester (Defense) met to establish public-affairs coordination.

At 1430Q, the President met with the National Security Council, Mr. Don Wilson (USIA), and Admiral Anderson to discuss the third draft of the Presidential speech and progress reports on preparations. It was positively decided that our first objective would be to block further shipments of offensive military equipment to Cuba and that our aim was also to see that the Soviet missiles were removed from Cuba under UN supervision and inspection.

The philosophy that Cuba should be invaded was not completely rejected. It was placed to the right in the spectrum of action. First would come the limited blockade, then a complete blockade.~ these failed to achieve the removal of the offensive weapons, the next step would be selective air strikes, followed finally by the implementation of one of two invasion plans - 314, where time did not permit peak readiness of the invasion force, or 316, where amphibious and airborne assault could be accomplished from a full readiness posture. The last contingency was general war, which might result from extreme Soviet reaction.
***
Monday, 22 October
*** The President had used the term "quarantine" instead of "blockade", because the latter term could have been interpreted as an act of war. The proposed interdiction was aimed solely at offensive weapons and every effort was to be made to not have other nations consider the action as a warlike act.
***
Tuesday, 23 October
On the day following the President's announcement, much interest still was shown in international reaction to the proposed U.S. action, not only that of the Soviet Bloc, but the free world as well. Russia canceled all military leaves and stopped discharges, particularly for personnel in rocket, anti-aircraft, and submarine duties. There also were several reports of Soviet long-range submarines along Russian shipping routes. A Japanese press report said that the Director General of Tass, visiting Japan, stated, "If the United States sinks a Soviet ship, there will be total war."
***
Wednesday, 31 October
Soviet merchantmen approaching the quarantine zone continued to heave to upon reaching the 500-mile line. By 31 October, Kladna and Karl Marx had joined Belovodsk and Groznyy in lying dead in the water. Other significant developments on this first day of the new phase of operations centered around reappraisal of submarine surveillance successes and committal of Latin American assistance to the U.S. military action. An unprecedented number of eleven submarines had been identified outside of Soviet home waters. At least four Russian "F" class submarines were operating in the area east of the Bahamas. All of these had been sighted on the surface at least once. In one case, one of these remained on the surface for 45 hours, under escort of two U.S. destroyers.

The end of the crisis came swiftly:

A quarantine was decided on that would interdict any further arms shipments to Cuba. Boardings and inspections of cargos were authorized. It was followed by the positioning of massive numbers of ships, troops and planes along the East Coast in case a direct attack on the missiles sites had to be undertaken to lead to their prompt removal. Additional U–2 flights were authorized (one of which was shot down with the loss of its pilot), confirming and extending the initial findings. Low–level photo reconnaissance flight produced exquisitely detailed information about the state of deployment of the Soviet ballistic missiles.

An intensive diplomatic effort was begun to inform allies and the United Nations about the situation. While the ballistic missile deployment was denied by the Soviet Foreign Minister Andrei Grominko on his October 18 visit to the White House and by Ambassador Zorin at the United Nations (both unaware of the photographs available to President Kennedy and Adlai Stevenson), the visual evidence presented at a special meeting of the United Nations Security Council on October 25 was so overwhelming that it led to speedy approval of the US military policies that had been put in place

In view of the firm, uncompromising actions instituted by the United States, Soviet Prime Minister Nikita Khrushchev reversed his missile deployment venture in the Western Hemisphere. On October 28 the offensive missiles were returned to the Soviet Union. 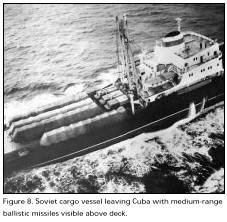