Churchill has welcomed its first shipment from Russia, marking the first manifestation of the Arctic Bridge trade route that the northern Manitoba port has been working on for some time.

The ship will now load 20,000 tonnes of wheat from the Canadian Wheat Board and bring it to Italy.

More on the Port of Churchill here:

The town is the northern terminus of the Hudson Bay Railway Leased by OmniTRAX. It is a useful link in the export of Canadian grain to European markets, with rail-sea connections made at Churchill. The port of Churchill, also owned by OmniTRAX and run by the General Manager, Lyle Fetterly. It is Canada's principal seaport on the Arctic Ocean.

Churchill is the main Arctic Ocean seaport in North America with a rail connection to the south. Lesser ports Moosonee, Ontario and Hay River, Northwest Territories also provide a rail link to the Arctic Ocean. Hay River is a riverport. Cargo shipped north from Hay River travels by barge. There are currently no roads from Churchill leading to the rest of Canada. There is an airport east of town with daily flights to Winnipeg, and the Kivalliq Region of Nunavut.

The Port of Churchill offers four deep-sea berths for the loading and unloading of grain, bulk commodities, general cargo, and tanker vessels. Close coordination with the Hudson Bay Railway, its affiliated company, allows efficient access to all North American points through a connection with the Canadian National railway system.

The 140,000-tonne elevator, with unit train unloading capacity, has the ability to clean, grade, store and transfer bulk grains from covered hopper railcars to ocean-going vessels. The Port of Churchill is closer to 25% of Canada's western grain production than any other port.
***
The Port is available for shipping and receiving ocean vessels from July until early November. Earlier or later scheduling is available by using ice-class vessels or icebreakers. 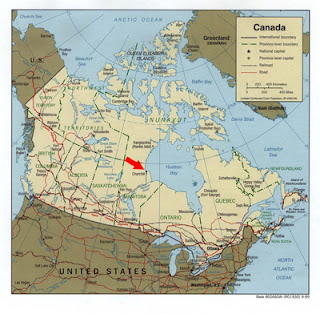 And, of course, due to global warming, it may soon be open year round...