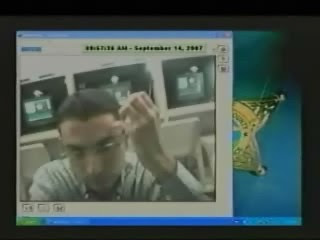 The arrest of a couple of young men near Goose Creek, SC, takes on different spin with news of a video by one of them demonstrating how to make a bomb:

In a 12-minute video posted on YouTube, an Egyptian man wearing a white shirt, khaki pants and rubber gloves explains in Arabic how to turn a toy boat into a bomb.

His name is Ahmed Abdellatif Sherif Mohamed, and last month he was arrested in Goose Creek after authorities found four PVC pipes containing a mixture of potassium nitrate, kitty litter and sugar in his car's trunk.

Mohamed told FBI agents he made the video to teach "those persons in Arabic countries to defend themselves against the infidels invading their countries," according to federal court documents released late Tuesday.

Specifically, he told the FBI "the technology which he demonstrated in the tape was to be used against those who fought for the United States."
***
Mohamed and Megahed, a 21-year-old University of South Florida engineering student, were stopped for speeding Aug. 4on S.C. 176 in Goose Creek.

They told deputies they were traveling to North Carolina for a vacation.Berkeley County sheriff's deputies saw one of the men disconnect some wires from a laptop computer and became suspicious.

In the back of the patrol car on the way to jail on charges of possession of an explosive device, the two whispered in their native Arabic while a hidden recorder taped their conversation, according to court documents:

"Did you tell them there is something in them?" Mohamed asked, an apparent reference to the PVC pipes.

"Water! Right? The black water is in the Pepsi."

"Did you tell them about the benzene (gasoline)?"

But the pipes weren't fireworks.

An examination by the FBI's explosives unit found the materials in the PVC pipes fit the legal definition of an "explosive."

After examining Mohamed's laptop computer, which was in the 2000 Toyota Camry that was stopped in Goose Creek, agents found an electronic folder titled "Bomb Shock." The folder contained several computer files about explosives, including TNT and C-4, a military-grade plastic explosive.

They also found the 12-minute video on the laptop. Someone had uploaded the video onto YouTube, a video-sharing Web site. It could be found on YouTube by entering a complicated 14-word search term, which included the words "martyrdooms" and "suiciders."

Two days after the traffic stop, FBI agents found a remote-controlled toy boat, still in its box, and a partially dismantled digital watch in Megahed's Tampa, Fla., home, where he lived with his parents. Authorities said in court documents they believe the two items were the beginnings of a homemade bomb.

Bail has been denied to one of the young men:

The judge says Youssef Megahed is potentially dangerous and a flight risk.

Prosecutors argued Megahed has a fascination with firearms.

They say he even stopped at a Wal-Mart to try to buy rifles. But Megahed's attorney says his client's interest in guns is innocent.

He also says Megahed didn't know about the explosives in the trunk of the car.

Megahed's brother, in what he asserts was a joke, was caught on video tape making what appear to be signals, though it appears his signals perhaps could not have been seen by his brother:

he federal government says a tape of Yousef Megahed's brother Yahia shows him using secret code through facial movements and then sign language to communicate with Megahed. The government told a federal judge, that's why Megahed is a danger to the community

And when the government first played that tape of what it said was Megahed's brother sending secret signals to him when he was talking to him while he was in jail it looked as if it had a real smoking gun. Unfortunately for the government at the time the tape was made, Megahed was in his cell and couldn't see it and Megahed's brother says he was just seeing himself on camera and making faces because he was bored.

Quite a sense of humor.

Part of the video availabe here.