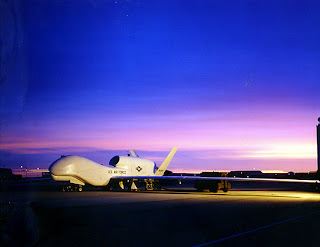 Well, someone is pitching Global Hawk as a tool in the fight against pirates, as set out here:

The U.S. Air Force plans to host 11 friends and allies in Hawaii next spring to pitch the idea of working together to put more eyes in the skies over the Pacific.
At an unmanned systems conference in Las Vegas, Gen. Jeffery Remington, director of air, space and information operations for Pacific Command, outlined a plan to bring together representatives from Australia, Brunei, India, Indonesia, Japan, Malaysia, the Philippines, Singapore, Thailand, South Korea and Sri Lanka in April to discuss a regional consortium to buy and operate Global Hawk UAVs, which are built by Northrop Grumman.
***
Of particular interest to all the countries would be monitoring the Straits of Malacca, the 500-mile stretch of sea between Indonesia and Malaysia that connects the Indian Ocean and the Pacific. Between one-fifth and one-quarter of the world’s shipping passes through the Malaccan strait, which has become an increasingly attractive target for modern-day pirates.
The Global Hawk is designed to gather radar, optical and infrared data from as high as 65,000 feet for as long at 35 hours.