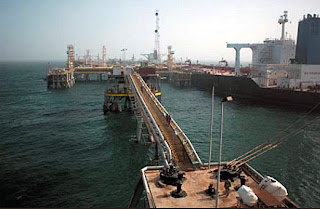 Ninety percent of Iraqi oil bound for the world market is loaded onto tankers through the terminal's mile-long web of beige pipes and shiny metal walkways.
***
"If someone wanted to really cripple Iraq, all they'd need to do is shut down work here," he said. "Without this terminal, there's no way that Iraq could ever get back on its feet. That's why our mission is so important."

About 800 US and coalition sailors and eight warships patrol the narrow waterway between Iraq, Kuwait, and Iran to ensure that sectarian violence or terrorists don't endanger the two Iraqi offshore oil terminals.
***
Since 2004, the force has overseen the repair and refurbishment of both Iraqi oil platforms. Earlier this year, both stations became operational for the first time since the 2003 US invasion, and now about 1.8 million barrels of oil are flowing through the two stations each day.

The uninterrupted flow is estimated to produce more than $5 billion in oil revenue for Iraq each year, money that in theory the country will use for federal spending and reconstruction efforts, instead of US taxpayer dollars.

Much more work remains to upgrade Iraq's pipelines and oil facilities to increase the country's export capacity to the government's target of 3 billion barrels a day. While that is underway, it is up to Task Force 158, as the coalition force is known, to ensure nothing undermines the progress made so far.

Since 2003, there have been approximately 400 insurgent or terrorist attacks against pipelines, pumping stations, oil fields, and other parts of Iraq's oil infrastructure, according to the Brookings Institution, a Washington-based think tank.

In one attempt, terrorists with Al Qaeda in Iraq packed explosives onto a local fishing boat in April 2004. The common vessel, known as a dhow, set sail from the Iraqi port of Um Qasr for the KAOOT terminal, the smaller of the two platforms about 10 miles offshore.

A US Navy coastal patrol boat, the USS Firebolt, intercepted the dhow before it reached the terminal. While a strike force was preparing to board the vessel, the militants detonated their bomb, killing two sailors and one Coast Guardsman.

The method was similar to the October 2000 bombing of the USS Cole in Yemen, in which Al Qaeda claimed responsibility for killing 17 American sailors.

Naval commanders in the Gulf say that another suicide attack is the biggest threat they fear for their crew and the oil platforms.

After the 2004 incident, coalition warships expanded the exclusion zone, allowing no commercial vessels within 2 miles of the two oil terminals.

And an earlier report on the Iraqi Navy role in protecting their national assets here:

Analysts say that if the Al Basrah Oil Terminal can sustain half of the current production rate they will balance the Iraqi budget by 2008. This is one of the main reasons why the platform is so vital to Iraq, said Iraqi Navy Commodore Adel, the Iraqi nNavy’s operational commander.

“The oil platforms are the life blood of our country,” said Adel. “It is with great honor that we are now the ones in the lead in protecting them.”

According to Adel, the Iraqi navy’s primary mission is to defend Iraq’s coast, territorial waters, vital ports and offshore assets against both external and internal security threats. Their secondary mission includes environmental response, search and rescue and to contribute to regional stability.

“The Iraqi navy has become an integral part of the coalition maritime force conducting maritime security operations in the North Arabian Gulf,” said U.S. Navy Cmdr. Dave Price. “They are simultaneously receiving training and participating as partners in the patrol and point defense responsibilities for Iraq’s crown economic jewels — the offshore oil terminals.”
***
The Iraqi navy consists of two squadrons — a patrol boat squadron and an assault boat squadron. It also includes one marine battalion, which serves both squadrons.

The assault boat squadron has 24 fast assault boats that routinely patrol the inland waters and approaches of the Kwar Abd Allah up to the port of Umm Qasr which is Iraq’s largest and only deep water port.

According to Price, both have seen tactical successes in combating smuggling and piracy as well as conducting a couple of successful rescues at sea for injured mariners.

“Incidents of piracy have continuously declined since the Iraqi Navy began 24/7 presence operations in the [Kwar Abd Allah] and their territorial waters,” Price said.

“Last July, merchant ships were afraid to come into our port due to pirating, but that is no longer the case because our squadrons have been successfully patrolling the port,” Iraqi Navy Commodore Adel said.