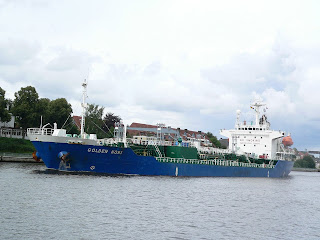 Somali pirates have hijacked a Japanese-owned chemical tanker in the latest such seizure in the Horn of Africa nation's notoriously lawless waters, a regional maritime official and a piracy watchdog said on Monday.

Andrew Mwangura, head of the East African Seafarers' Assistance Programme, said shipping sources in both Somalia and Japan had confirmed the vessel was seized eight nautical miles offshore on Sunday morning.
***
There are five well-organised pirate groups operating in Somali waters. We know the one which took this boat," he said.

An official from the International Maritime Bureau's Piracy Reporting Centre in Kuala Lumpur identified the vessel as the 12,000 deadweight-tonne Golden Nory.

"She has been taken into Somali waters, and we haven't heard anything from her since," the official said.

Quoting an IMB official, Japanese news agency Kyodo said the tanker had 23 non-Japanese crew on board, made up of its South Korean captain and South Korean, Filipino and Myanmar nationals. 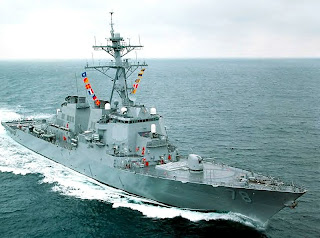 The USS Porter responded to a distress call from the merchant vessel carrying benzene, the officials said. Sunday's shooting took place in international waters, they said.

At the request of Somalia's government, a second U.S. warship, the destroyer USS Arleigh Burke, is now shadowing the merchant ship inside Somali waters, the officials said.

In recent years, warships have stayed outside the 12-mile limit when chasing pirates.

I trust some other assets are on their way...time someone busted these pirates' chops.

UPDATE: It appears that Somali pirates grabbed another ship on 30 Oct 07, but the crew overpowered their captors and are headed to freedom. See here.

UPDATE2: A reminder of why taking on these pirates is a humanitarian mission here:

Delivering supplies to Somalia, both commercial goods and humanitarian aid, has been a logistical and security challenge ever since the collapse of the last national government in 1991.

Roadblocks controlled by militia groups across the country have hampered deliveries by road.

Transportation by sea should, in principle, be both cheaper and safer, but a recent increase in the frequency of attacks by pirates appears to have led to higher shipping costs and a dramatic reduction in the use of cargo vessels, particularly those employed in moving food assistance to Somalia from ports in Kenya and elsewhere in Africa.

“Close to 80 per cent of WFP’s assistance to Somalia is shipped by sea but, because of piracy, we have seen the availability of ships willing to carry food to the country cut by half,” said WFP Executive Director Sheeran.

“Pirates may have a romantic image on the silver screen these days, but the picture might not be quite so pretty from the point of view of someone stuck in a camp for internally displaced people in Somalia, dependent on food assistance for survival.
***
Much more has to be done to address this problem of piracy and, at WFP, we are much encouraged by the actions that IMO has taken recently for that purpose.”

So far this year there have been 15 attacks on vessels in or near Somali waters, which carry some of the highest risks of piracy in the world.

Two of these attacks involved WFP-contracted ships, and in one of these two incidents, a security guard was killed. During 2006, there were a total of 10 attacks.

UPDATE3: Got a nice link from the NYT's The Lede, but you might note that some of the comments thereto seem to view this mission as something other than humanitarian.

UPDATE4: Galrahn updates the 5th Fleet posture regarding asset possibly available to take action against the Somali pirates here. It's more than just a couple of guided missile destroyers...