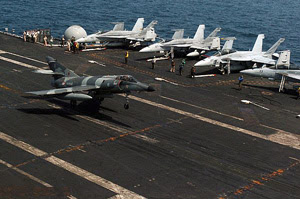 In the sense of Thomas Friedman, as portayed by Robert Kaplan discussing the new Maritime Strategy at the Atlantic in The Navy’s New Flat-Earth Strategy.

This is very much a diplomatic document, meaning it is necessary to read between the lines. Without mentioning China and without going into specific numbers—or even asserting the need for more ships—the 16-page document makes the case for a Navy that must do, if not everything, then nearly everything. And it makes its case within an intellectual framework that should resonate with the public and a Democratic Congress: the dialectic of globalization. “Our Nation’s interests are best served by fostering a peaceful global system comprised of interdependent networks of trade, finance, information, law, people and governance.” 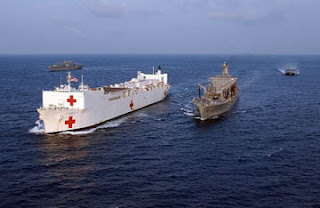 UPDATE: Another, but not totally dissimilar view, here:

Finally, no amount of cooperation can compensate for the corrosive consequences of a naval shipbuilding program that is dead in the water. You can't sustain global maritime supremacy by buying one submarine a year and one aircraft carrier every five years. And you can't fix a fouled-up shipbuilding sector by launching a political jihad against the handful of shipyards that have survived a generation of Navy mismanagement.

The Navy needs to settle now on what warships it wants for the future and start building them at a much faster rate; otherwise it will lack the tools to carry out all its high-minded strategic concepts.

UPDATE2: Something about all this "cooperation" reminds me of those cautionary words from Gunny Highway, "Just because we're holding hands doesn't mean we'll be taking warm showers together until the wee hours of the morning. "

Worst case scenarios of getting little help from "allies" when the chips are down still need to be considered, in my admittedly jaundiced view.

UPDATE3: And over at Steeljaw Scribe, the guy in charge of the prep of the new Strategy holds forth here. Note that in the comments, he refers to the Kaplan piece as bein on target...
Posted by Mark Tempest at 10/24/2007 07:39:00 AM