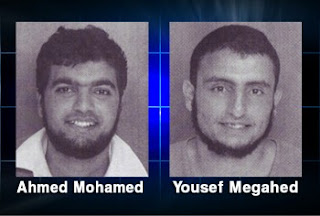 Megahed, 21, was arrested Aug. 4 in South Carolina along with fellow USF student Ahmed Mohamed, 26, after deputies found explosives in the trunk of the car in which the two men were riding, authorities said. Mohamed was driving the care, which was registered to Megahed's brother.

Mohamed has waived his right to a bail hearing. Both defendants are Egyptian nationals. Megahed is a legal, permanent U.S. resident, and Mohamed has a student visa.

Both are charged with illegally transporting explosives. Mohamed also is charged with trying to help terrorists by teaching or demonstrating the use of explosives. Authorities say Mohamed posted a video to the Web site YouTube in which he showed how to use a remote-controlled toy to detonate a bomb.

"The evidence fails to establish or even suggest any innocent or wholesome explanation for the events that led to Megahed's arrest," Merryday wrote.

"Guns, explosives, fuses, canisters of gasoline, ammunition, welding equipment, GPS devices, all-night interstate drives to an unstated and indeterminate destination, stops to check gun prices and availability, and computers with a recent history of visits to sites that feature the advocates and the means of violence are not attributes that a disinterested but cautious observer associates with a safe and tranquil citizen of the community," the judge said.

"Rather, a person about whom these attributes are discovered is a person whose means, motive and degree of determination are unknown and unpredictable and who is highly suspicious and threatening."