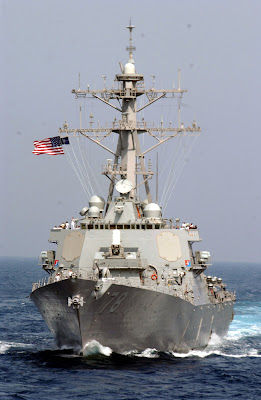 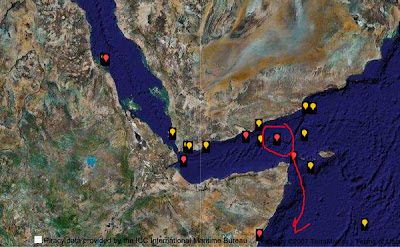 Sailors from the Norfolk-based destroyer James E. Williams boarded a North Korean merchant ship Tuesday that had been hijacked by pirates off the coast of Somalia, while two other Navy vessels tailed a pirated Japanese ship in the same region.

The Williams, which left Norfolk in July , was about 50 nautical miles from the ship Dai Hong Dan in the Arabian Sea when it received word of the pirate attack, said Lt. John Gay , a spokesman for the Navy’s Central Command in Manama, Bahrain.

The Williams dispatched a helicopter and ordered the pirates to give up their weapons via a bridge-to-bridge radio. The North Korean crew, which had retained control of the steering and engineering spaces, then confronted the pirates and gained back control of the bridge, according to a Navy news release.

And in dealing with the other hijacking:

Hundreds of miles away in the same region, two other Navy ships were tracking a Japanese-owned ship seized by pirates over the weekend, Gay said.

The spokesman said that two “coalition” ships from Combined Task Force 150 had responded to the hijacking of the Golden Mori , a Japanese-owned ship registered in Panama.

Navy officials with knowledge of the incident confirmed that the U.S. destroyers Porter and Arleigh Burke, both based in Norfolk, responded to the Golden Mori’s distress call.

One of the responding ships fired warning shots in front of the Golden Mori.

It also aimed disabling shots at two skiffs – the boats the pirates used to approach the ship – towed behind the Golden Mori. The skiffs caught fire and sank, Gay said.

Gay said coalition crew members have observed men carrying small arms aboard the bridge of the ship, which was hijacked in the Gulf of Aden, a critical body of water between Yemen, Djibouti and Somalia that links the Red and Arabian seas.

After the hijacking, the Golden Mori sailed 380 miles south and remained off Somalia’s coast, Gay said.

And a couple of interesting observations concerning our small but really expensive fleet:

Robert Work, a retired Marine officer and analyst at the Center for Strategic and Budgetary Assessments in Washington, said piracy is a “persistent threat” that the Navy has worked to address in recent years.
***
“Essentially, you don’t want to use a billion dollar DDG [guided missile destroyer] to suppress pirates,” Work said. “That’s a mission for a much smaller ship. But we have a lot of ships in that area because of ongoing operations in the Horn of Africa. These are ships designed for high-end war fighting, not chasing pirates.”

Still, whenever pirates seize a ship, it becomes a priority for any naval vessel in the vicinity, Work said – regardless of whether the ship belongs to an ally, like Japan, or a potential enemy, like North Korea.

“The Navy does this for all mariners,” Work said. (emphasis added)

And exactly where are these lower cost, high speed, sea worthy, well-armed ships that should be doing this sort of work? In the "1000 ship navy" most such ships belong to our allies. As noted in previous post, there is French frigate headed to the area for anti-piracy work... 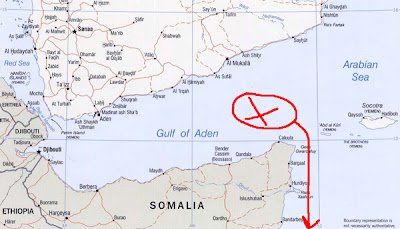 Note the Golden Nori's* position was reported as 13:05N -050:24E at the time of her distress call (see here. As indicated (roughly) on the maps and the altered satellite map (taken from the ICC CCS "Live Piracy Map website" here) above, she was taken in the Gulf of Aden and then driven south.

*There is some confusion as to what the ship's name is. I am assuming it's the Golden Nori, about which see here.