Thoughts (not particularly favorable to the U.S.) on Myanmar (Burma) and its "Saffron Revolution" as part of a global political and strategic game here:

A relevant question is why the US government has such a keen interest in fostering regime change in Myanmar at this juncture. We can dismiss rather quickly the idea that it has genuine concern for democracy, justice, human rights for the oppressed population there. Iraq and Afghanistan are sufficient testimony to the fact Washington's paean to democracy is propaganda cover for another agenda.

The question is what would lead to such engagement in such a remote place as Myanmar?

Geopolitical control seems to be the answer. Control ultimately of the strategic sea lanes from the Persian Gulf to the South China Sea. The coastline of Myanmar (Burma) provides naval access in the proximity of one of the world's most strategic water passages, the Strait of Malacca, the narrow ship passage between Malaysia and Indonesia. 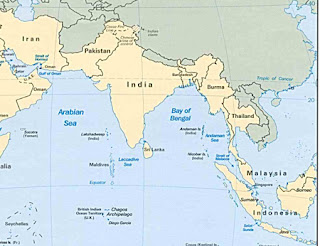 I tend to question anyone who points out the strategic location of a state on a major sea lane while also referring to it as a "remote place."

Nepal is remote. Myanmar (Burma) is not.

And who so rapidly dismisses any pro-democracy interest of the U.S. If Myanmar (Burma) were a functioning democracy, does he believe we would be interested in regime change?

I guess all those states that really border the Strait of Malacca better be on guard...