Pay attention to this warning! 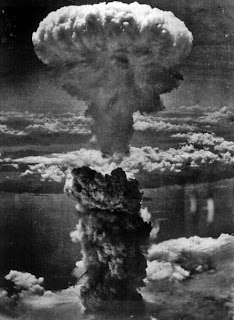 When even the WaPo gets on board David Ignatius - Portents of A Nuclear Al-Qaeda:

Mowatt-Larssen argues that for nearly a decade before Sept. 11, al-Qaeda was seeking to acquire weapons of mass destruction. As early as 1993, Osama bin Laden offered $1.5 million to buy uranium for a nuclear device, according to testimony presented in federal court in February 2001. When the al-Qaeda leader was asked in 1998 if he had nuclear or chemical weapons, he responded: "Acquiring weapons for the defense of Muslims is a religious duty. If I have indeed acquired these weapons, then I thank God for enabling me to do so."

Even as al-Qaeda was preparing to fly its airplane bombs into buildings, the group was also trying to acquire nuclear and biological capabilities. In August 2001, bin Laden and his deputy, Ayman al-Zawahiri, met around a campfire with Pakistani scientists from a group called Umma Tameer-E-Nau to discuss how al-Qaeda could build a nuclear device. Al-Qaeda also had an aggressive anthrax program that was discovered in December 2001 after bin Laden was driven from his haven in Afghanistan.

Al-Qaeda proclaimed a religious rationale to justify the WMD attacks it was planning. In June 2002, a Kuwaiti-born cleric named Suleiman Abu Ghaith posted a statement on the Internet saying that "al-Qaeda has the right to kill 4 million Americans" in retaliation for U.S. attacks against Muslims. And in May 2003, at the same time Saudi operatives of al-Qaeda were trying to buy three Russian nuclear bombs, a cleric named Nasir al-Fahd issued a fatwa titled "A Treatise on the Legal Status of Using Weapons of Mass Destruction Against Infidels." Interrogations of al-Qaeda operatives confirmed that the planning was serious. Al-Qaeda didn't yet have the materials for a WMD attack, but it wanted them.

Most chilling of all was Zawahiri's decision in March 2003 to cancel a cyanide attack in the New York subway system. He told the plotters to stand down because "we have something better in mind." What did that mean? More than four years later, we still don't know.

After 2004, the WMD trail went cold, according to Mowatt-Larssen. Many intelligence analysts have concluded that al-Qaeda doesn't have nuclear capability today. Mowatt-Larssen argues that a more honest answer is: We don't know.

So what to do about this spectral danger? The first requirement, says Mowatt-Larssen, is to try to visualize it. What would it take for al-Qaeda to build a bomb? How would it assemble the pieces? How would the United States and its allies deploy their intelligence assets so that they could detect a plot before it was carried out? How would we reinvent intelligence itself to avert this ultimate catastrophe?

And, as set out here, it doesn't have to have a mushroom cloud atached to it to do major damage:

A dirty bomb is in no way similar to a nuclear weapon or nuclear bomb. A nuclear bomb creates an explosion that is millions of times more powerful than that of a dirty bomb. The cloud of radiation from a nuclear bomb could spread tens to hundreds of square miles, whereas a dirty bomb’s radiation could be dispersed within a few blocks or miles of the explosion. A dirty bomb is not a “Weapon of Mass Destruction” but a “Weapon of Mass Disruption,” where contamination and anxiety are the terrorists’ major objectives.