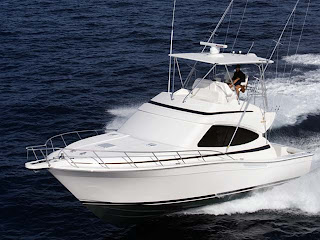 A couple of guys found floating in a lift raft under mysterious circumstances, the crew of the fishing boat they chartered missing, the boat found adrift and the guys in the raft saying "pirates" did it - as recapped here with a look at the effects on the charter business (which is another one of those areas that might need a little more security checking by the Homeland Security Department):

The captains also are trying to divine the motives of the two men who were found in a life raft Monday several miles from the abandoned Joe Cool: Kirby Archer, 36, accused of stealing $92,000 from a Wal-Mart in his home state of Arkansas, and Guillermo Zarabozo, 19, Hialeah. They are jailed on federal charges of fleeing to avoid prosecution and lying to a federal agent, respectively. The two claimed the boat was hijacked by pirates, who then killed the crew.

In light of the event, skippers across South Florida say prospective charter clients likely will undergo more scrutiny in the future.

"I think that captains will research their parties a little bit more now," said Tom Williams, captain of the Out There, a 38-foot Rampage based in North Palm Beach.

Boat hijackings are rare off South Florida waters. "It's very uncommon. We don't worry that much about it," said Brady. "You could get hijacked at a red light."

But there have been instances. One eerily similar to the current case involved a captain and mate who in 1995 accepted $4,000 cash to take two men to the Bahamas. Once near land, the hijackers commandeered the vessel at gunpoint. The captain jumped overboard and swam to shore. The attackers spared the mate when the ship grounded and escaped in a life raft. They were caught, but skipped bail.

In 1992, two Cuban men chartered a fishing boat in the Keys, forced the captain into the water at knifepoint and tried to sail to Cuba. They were arrested when their boat ran out of fuel, and later convicted for the murder of the captain, who drowned.

Still, charter boat skippers enjoy a romantic, near idyllic existence, doing what they love, fishing in the sun, cruising the sea.

Of special concern, the old passport dodge employed by one of the suspects, as set out in court filings:

On or about September 22nd, at about 3:15 p.m., ARCHER and ZARABOZO anived at
the Miami Beach Marina. The two men spoke with Sissy Baby's owner. ARCHER
stated that he and ZARABOZO worked for a survey company and that they had finished
early. According to ARCHER, the pair were planning to meet with their girlfriends on a
yacht at the Big Game Resort and Yacht Club in Bimini. ARCHER stated that he was
unable to fly to Bimini because his girlfriend had packed away his passport. ARCHER
said that he planned to meet his girlfriend at the dock in order to retrieve the passport.

Should have heard alarm bells ringing...

Doubts regarding the story of pirates here:

Whatever the legal complexities, people who fish or patrol the waters of the Florida Straits express doubts about the hijack story.

''In my 20 years, I've never heard of any private vessel being involved in an act of armed high-seas piracy off the coast of Florida,'' said Zachary Mann, senior special agent for U.S. Customs and Border Protection in Miami, which monitors the Straits.

And myriad boaters and fishing captains have pointed out that the story defies an inescapable fact of the Gulf Stream: It flows north, about 4 mph on average.

If hijackers killed the crew as they crossed to Bimini, current would have carried the boat northward. Instead, the abandoned boat, and the survivors in a life raft, wound up nearly 100 miles in the opposite direction -- closer to Cuba.

Then, said Dean Panos, a veteran charter captain who runs the Double D out of the Keystone Point Marina in North Miami, there's the question of what hijackers were after. Agents seized a wad of cash from Archer.

''They walked away with $2,200 in their pockets,'' Panos said. ``Don't you think the hijackers would have maybe wanted that?''

Of course there is also another mystery of a missing boat captain here:

An unexperienced boater tried his best to let rescuers know his vessel's captain had gone overboard in a distress call released by the U.S. Coast Guard on Monday.

Lindsay Forde, 48, of Hollywood, was reported missing about 6:40 p.m. Saturday in an area 75 miles west of Bayport, according to the U.S. Coast Guard. Bayport is a beach town about 60 miles northwest of Tampa.
***
The men, who had not filed a plan, made a few port stops in Florida, Tully said. She did not know their destination port. On Saturday afternoon, Swindle went below decks for a while, leaving Forde to his steering, Tully said. At the time, waves were 6 to 8 feet and winds were a blustery 27 knots. Tully said such conditions would fiercely rock any small boat.

When Swindle returned topside, Forde had disappeared, he told the Coast Guard when he called for help.

No foul play suspected in the latter case.