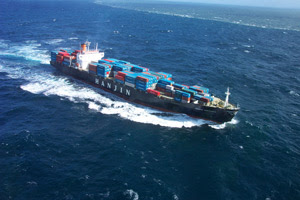 The fear that terrorists might smuggle a nuclear weapon into the United States hidden inside a shipping container has led to "ill-conceived" security measures that fail to grasp the way transportation systems worldwide are interconnected, a senior shipping industry executive said earlier this week.

"This highly efficient supply chain network-of-networks is critically dependent on a transport system that is in perpetual motion," said Stephen Carmel, senior vice president of maritime services at Maersk Line Ltd., a Norfolk, Va.-based transportation services firm. "A stoppage anywhere will propagate effects through the system and quickly become a stoppage everywhere."
***
He highlighted the "100 percent scanning requirement" of a recently enacted bill to implement unfilled recommendations of the 9/11 Commission. The White House initially opposed the scanning provision, but President Bush still signed the bill last month. The law requires all U.S.-bound shipping containers to be scanned by radiation detection equipment at foreign ports by 2012.

Critics contend that technology to scan the more than 11 million shipping containers that arrive at U.S. seaports every year is not available. They also say the requirement would result in costly bottlenecks and would unduly burden some nations with ports too small to install the scanners.

"It's a concern because we haven't seen the details," Carmel said. "Done wrong, it would be catastrophic." Any maritime or homeland security strategy that puts a "chink in the supply chain" will do more harm than good, he said.

Today's global economy and business practices such as just-in-time delivery demand a hyper-efficient system to transport both final products and intermediate parts, the shipping executive said. He characterized the supply chain as a web of interlocking conveyor belts that has no tolerance for stoppages, and warned that industry and jobs would flee the United States for less regulated locations if burdensome security measures hobble the transportation system.

He said that nearly every maritime strategy he has seen describes shipping lanes as under threat and in need of protection to ensure the unimpeded flow of goods. "I do not see a threat," he said. He dismissed the menace of piracy as a coastal waterways affliction that does not affect ocean-going supertankers and container ships.