A Bridge Between Yemen and Djibouti? 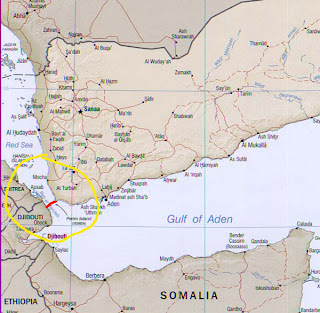 The world's longest (17 miles) bridge is being proposed between Yemen and Djibouti. Is it a threat to security in the Horn of Africa? It might be, it says here:

This past April, the Dubai-based Middle East Development LLC issued a notice-to-proceed to Noor City Development Corp., based in Napa, CA, authorizing the firm to "proceed with the planning, development, construction and management of the bridge between Yemen and Djibouti" (Engineering News Record, May 1). The Saudi billionaire and half-brother to Osama, Tarek Bin Laden, heads the project, estimated at $10-20 billion. The project enjoys the full support of the presidents of Djibouti and Yemen.

Yet, Tarek Bin Laden's pedigree should add additional concerns. More than merely a developer, in the 1990s he was general supervisor of the International Islamic Relief Organization (IIRO), a fraudulent Saudi group designated by the U.S. Treasury Department as having aided al-Qaeda and other terrorist groups' fundraising efforts. The IIRO, or Hay'at al-Igatha al-Islamiya al-'Alamiyaa, is one of eight bodies under the umbrella of the Mecca-based Muslim World League (WML). The IIRO's terrorist ties go back to the first Afghan jihad against the Soviets, when Osama bin Laden's Maktab al-Khidmat (Office of Services) worked with Wael Julaidan, then with the IIRO and WML (Government's Evidentiary Proffer Supporting the Admissibility of Co-Conspirator Statements, United States of America v. Enaam Arnaout, Jan. 6, 2003). The IIRO provided logistical support to the mujahideen and Julaidan, according to the federal government, and "was a leading supporter of the jihad through the relief organization network." On August 3, 2006, the Treasury Department designated the Philippine and Indonesian branches of the IIRO, as well as its Saudi executive director, "for facilitating fundraising for al-Qaeda and affiliated terrorist groups." The group was identified as a major fundraiser for Abu Sayyaf and Jemaah Islamiya. 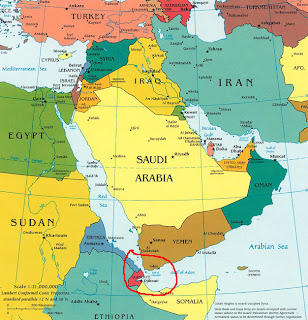 All of this begs the question: how could Osama bin Laden's half-brother be constructing a bridge linking Yemen to the HoA at the birth of AFRICOM? The project physically and figuratively links al-Qaeda in Arabia to the African continent, posing a serious long-term security dilemma.

It should be noted that the narrowest gap between Djibouti and Yemen is the choke point between the Red Sea and the Gulf of Aden know as Bab el-Mandab, well known as a world oil transit chokepoint:

Closure of the Bab el-Mandab could keep tankers from the Persian Gulf from reaching the Suez Canal/Sumed Pipeline complex, diverting them around the southern tip of Africa (the Cape of Good Hope). This would add greatly to transit time and cost, and effectively tie up spare tanker capacity. The Bab el-Mandab could be bypassed (for northbound oil traffic by utilizing the East-West oil pipeline, which traverses Saudi Arabia and has a capacity of about 4.8 million bbl/d. However, southbound oil traffic would still be blocked. In addition, closure of the Bab el-Mandab would effectively block non-oil shipping from using the Suez Canal, except for limited trade within the Red Sea region. Security remains a major concern of foreign firms doing business in the region, particularly after the French-flagged tanker Limburg was attacked off the coast of Yemen by terrorists in October 2002. 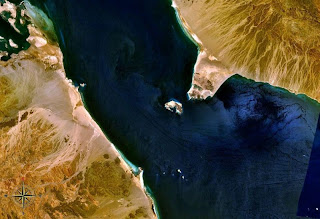 The effect of a bridge across the narrow strait would be to narrow it further, channeling ship traffic into narrower lanes of transit and making them more vulnerable to attack and the waters of the Bab el-Mandab easier to choke with wrecked ships and mines.

On the other hand, it may be a really long bridge.