Commercial dispute spooling out of control off Iran 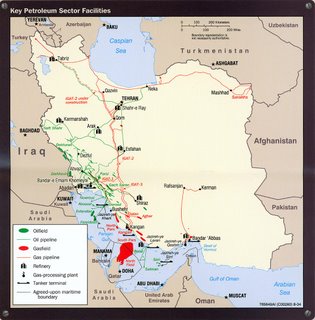 One more reason not to do business with "government" oil companies found in this piece Iranian troops fire on Romanian oil rig:

Romania said Iranian troops opened fire from a warship and seized a Romanian oil rig Tuesday off the coast of Iran, holding its workers in an incident stemming from a commercial dispute.

Sergiu Medar, a national security adviser to Romanian President Traian Basescu, said the seizure resulted from a commercial dispute Iran is treating "in an extreme way." He gave no details.

The Constanta-based company, part of the Upetrom Group Management Limited which employs some 4,000 staff with 98 years experience in manufacturing oilfield equipment, said two of its rigs – Fortuna and Orizont – were held hostage in the Iranian waters despite the termination of contract four months ago.

“This is a complete violation of human rights as the rigs and its crew was moored in the Iranian waters even after the termination of contract,” said Mr. Gabriel Comanescu, President of GSP.

“As a gesture of goodwill GSP allowed the rigs to continue its work schedule for three months since the date of termination of contract on April 1st , 2006 in order to secure the well,” he said.

“We have managed to arrange the necessary clearance for the boats to take out one of the rigs – Fortuna - based on a court decree from Queshm and an implementation order from Hengam Island security forces hand delivered to PEDCO, but the other rig along with Romanian crew is yet to be released though there is a court order issued three months ago from Kish Court,” he said.

Analysts said this looked like a rare case and much depends on the conditions of the charter party.*

"It is the first time we are hearing of a rig-related case. Provided the conditions of the charter party were complied with, the rig owner is entitled to take it away on expiry of the contract and the Iranians would have little comeback on this," said Frank Kennedy, a maritime consultant in Dubai.

"But if the charter conditions were not complied with, then there will be repercussions," Kennedy said. "We don't know the clauses of the contract and cannot comment further."

Another Dubai analyst said due to political risks many companies were unwilling to extend contracts with Iranian companies.

"I think there are few international rigs operational in Iran despite the many tenders coming out," the analyst said.

I doubt this will make it easier for Iran to find rig owners willing to role the dice on Iranian justice.

UPDATE2: Added map. Click on it to make it bigger.

GSP said it had every right to take back possession of the rig after the
contract with Oriental Oil was terminated, and added that it had since
discovered "that the Dubai-based company had never existed and it was never
registered with the Dubai Chamber of Commerce and Industry."

Last week, Iranian energy news agency Shana reported that Petroiran had
called on the UAE to help with returning the Fortuna rig, which it said had
been "hijacked from Iranian waters."

Petroiran managing director Mostafa Khoee was quoted saying the rig was
under rental contract to Oriental Oil for two years and that the rig was still
at Iran's disposal.

However, "a vessel that was on its way to Fujairah has illegally entered
waters of Iran's Hangam gas field and carried the oil rig out of Iranian
waters," Khoee said. "Petroiran will follow the matter through legal
measures," he was quoted as saying at the time.

Hangam is located in the Strait of Hormuz, 20 kilometers off Qeshm island
in the Gulf. The field is jointly shared with Oman. The development of Hangam
has been delayed because drilling equipment to spud appraisal wells was not
procured on time. At the moment, only four foreign rigs are active in Iran's
oil sector.

Foreign Ministry spokesman Hamid-Reza Asefi Tuesday rejected reports on seizure by Iran of a drilling oil rig in the Persian Gulf belonging to a Romanian company.

"These reports are part of media misinformation and are false," said Asefi.