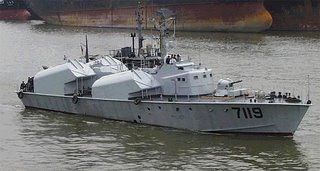 An interesting read from The Jamestown Foundation Silent Partner: China and the Lebanon Crisis. More information on the C-802 anti-ship cruise missiles fired by Hezbollah:

On July 14, just two days after the conflict erupted, an Anti-Ship Cruise Missile (ASCM) launched from the coast of Lebanon hit an Israeli Hanit (Spear) Sa’ar 5 corvette, an anti-aircraft warfare ship that is said to be the best in its class. Not fatally damaged, the vessel managed to return to active service after a couple of weeks of repairs, but four servicemen were killed in the fire caused by the hit. A second missile hit an Egyptian merchant ship. Positively identified by its electronic signature as a Chinese-made C-802, the existence of such a missile in Hezbollah’s arsenal had been unknown to Israeli intelligence. Designated in China as the YJ (Yingji)-8 (or 82), around 60 to 75 (some say 125) C-802s had been delivered to Iran by 1997. Several of them subsequently found their way into Hezbollah hands. In addition, Arab sources have reported that Iran had supplied Hezbollah with Chinese-made Houdong fast-attack crafts (al-Sharq al-Awsat, July 29) as well as with Chinese-made multiple barrel rocket launchers, including the 12-tube Type 63 (also known as the Fajr-1) and the WS-1/WS-1B, which was redesigned by Iran as the Fajr-5 (Strategic Update, July).
***
Considered one of the best ASCMs in the world, the C-802 carries a 165 kg time-delayed semi-armor-piercing high explosive warhead to a range of 120 km at Mach 0.9 speed and at an altitude of 5-7 meters above the sea. It has a 0.75 single-shot hit probability, and under ideal conditions, could have, according to some sources, 0.98. Conditions for hitting Israeli vessels opposite the Lebanese coast were more than ideal. On the night of July 14, when the soldiers where busy preparing for the Sabbath, the vessel’s CIWS (Close-in Weapon System) was most likely not set in auto-engage; given their lack of intelligence, as they were not expecting any ASCM attacks. Moreover, the vessel was located about 16 kilometers away from the coast, giving them, at Mach 0.9 speed, approximately 55 seconds to respond if the missile was immediately detected upon launch. In reality, however, because the C-802 flew at such a low altitude and because its radar was activated only close to the target, the crew had no more than 20 seconds to react. The first C-802 hit but failed to sink the vessel. The second missed another Israeli vessel and instead sank an Egyptian freighter. Three more C-802s were fired on August 1, China’s Army Day, against Israeli Navy vessels—all missed. A PLA study of the missile’s performance is probably already under way.