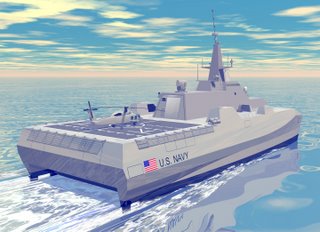 "There's a lot of appeal about what it can do," said Navy Cmdr. Joe Chiaravallotti, the Navy's littoral combat ship section head.

"Its concept is new and foreign to anything we've ever done before, and ... that, by its very nature, causes controversy. Until we put these ships out in numbers, that controversy is going to be there."

Independent analysts tend to give the program high marks, even with the increasing concern over cost. "The littoral ship is the star of the Navy's shipbuilding program," said Loren Thompson with the Lexington Institute in Arlington, Va.

John Pike, director of GlobalSecurities.org in Alexandria, Va., says the ship will be "fiendishly fast" and "certainly seems like a good idea right now."

But yet to be tested, he said, is how its unusual design will handle in rough waters.

"The crews aren't going to do you much good if they're all barfing," he said.

With the emergence of new threats after 9-11, Clark and other Navy leaders pushed for a light, high-speed ship that could ply shallow waters off-limits to larger, more conventional ships. Clark also wanted a ship that could be produced much faster than the normal cycle, which typically spans years.

"I didn't think we had the right kind of force structure to deal with the threats and challenges we were going to face in the 21st century," Clark said in a recent telephone interview.

Potential adversaries in the coastal environment, he said, could include "pirates, terrorists, who knows. You don't know if you're not there, and that's the whole point."

One of the most striking features of the emerging line of ships is what the Navy describes as "plug and play." The ships can be easily refitted for new missions with modules that enable it to switch between three main tasks -- mine warfare, anti-submarine warfare and surface combat.

They will be equipped with unmanned air and sea drones, an attack helicopter and smaller watercraft. Littorals are also designed to reduce -- though not completely eliminate -- detection by radar.

Like a lot of innoative sea concepts, the proof will be at sea.

UPDATE: A plan to have the LCS sailors qualified to do their jobs before they report aboard here. What a concept:

Commander, Naval Surface Forces, is overseeing the development of a revolutionary training process for the Littoral Combat Ship (LCS) called Train to Qualify (T2Q) that will enable LCSís hybrid Sailors to be fully trained before reporting to the ship.

The new system of preparation and evaluation for LCS is necessary because of its unique crew size and billets aboard. Each LCS will have a core crew of about 40 Sailors for a ship about the size of a frigate. The core crew will be joined by a mission package crew and an aviation detachment, bringing the total crew size to approximately 75. To perform any one of several missions, an LCS seaframe can be configured with mine warfare, anti-surface or anti-submarine mission modules.

"With Train to Qualify, everyone has to report aboard the LCS ready to fulfill all the duties of their watches and their jobs, both individually and as an integral part of the crew," said Dr. Carl Czech, head of the Human Performance Center Detachment at Commander, Naval Surface Forces.

I guess the opportunity for leave for the crew might be limited, too, given that even have 4 sailors ashore means a 10% reduction in crew available...