Least surprising headline from the WaPo: "Suspected Somali pirate accuses US of torture" 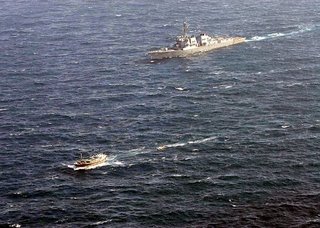 Remember those Somali pirates captured by the U.S. Navy?

Ten suspected Somali pirates captured by the U.S. Navy early this year will stand trial in Kenya in a hearing intended to deter rampant piracy off Somalia's coast, a Kenyan magistrate said on Thursday.
***
Piracy is endemic off Somalia's coastline, but more foreign patrols and the anti-piracy stance of Mogadishu's newly powerful Islamists have stemmed a wave of attacks in Somali waters.

U.S. Navy sailors captured a ship near Mogadishu in January with 10 pirates on board and 16 Indians believed to be hostages.

Defense lawyers said they planned to appeal the decision and reiterated the Somalis' innocence.

The 10 men pleaded not guilty in late January after U.S. officials handed them over to Kenyan authorities.

Washington has praised Kenya for taking custody of the suspects, but relatives of the arrested Somalis have warned the east African nation against cooperating with the Americans.(source)

Threats by relatives aside, one of the pirates says he was tortured in some unspecified way by the U.S. Navy:

One of ten suspected Somali pirates captured by the U.S. Navy early this year accused on Thursday the United States of torture at the opening of a trial intended to deter rampant piracy off Somalia's coast.

"We were arrested by the U.S. Navy and forced to board the American ship. Inside the ship we were tortured by the Americans who could not understand our language," defendant Hassan Mahamud Mohamed told the court in Kenya's coastal town of Mombasa.

He did not give details on the alleged torture.

However, I love their story of how they came to be on the Indian dhow:

Mohamed said he and the nine others were stranded fisherman who boarded an Indian-owned ship looking for refuge, and were not pirates.

"We had gone fishing when our engine boat stalled and we got stranded in the high seas. Then we saw an Indian vessel and we sought help from the crew by raising our hands. We boarded the Indian vessel then we saw an American ship," he said.

A variation on the theme of breaking into the jewelry store so that you could use the phone to report an emergency?
Posted by Mark Tempest at 8/07/2006 10:59:00 AM