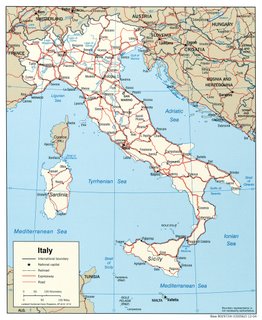 At least 10 people died and as many as 40 were feared missing when a small boat packed with illegal immigrants sank off Sicily on Saturday, prompting Italy to call for greater cooperation to fight human trafficking.

"What happened today is not only a tragedy but nothing less than a crime," Interior Minister Giuliano Amato said in a statement. "And if we don't manage to punish crimes they repeat themselves and tragedies repeat themselves too."

Coastguard officials said 70 people had been rescued and 10 bodies, including four women, had been recovered.

Survivors reported there had been up to 120 immigrants on board. Such estimates could be inexact so it was difficult to estimate how many were missing, officials said.

Lampedusa, between Sicily and Libya, has become a gateway for illegal immigrants and refugees who leave north Africa in an attempt to enter the European Union.

Police later identified five men among the survivors who they suspected were part of a gang that organised the voyage. The men were believed to be Libyan, police said.

One navy ship had been following the immigrant boat and was able to start the rescue quickly, hence the high number of survivors, the coastguard said.

Survivors said the boat turned over when the immigrants saw the Navy vessel and many of them moved abruptly to one side.

At least one article reports an effort to try to pin the "wreck" on the Italian Navy here:

Prosecutors were probing whether an Italian Navy ship may have caused a boat crammed with African migrants off southern Italy to sink, leaving at least 10 people dead and around 40 missing, ANSA news agency said.

The prosecutor's office on the southern island of Sicily said it was launching an investigation into whether an attempt to rescue the migrants from their overloaded craft may have caused it to overturn.

Look, no matter whether the Italian Navy was visible to the human cargo, the fault lies with the smugglers who overloaded the boat and created a situation in which the would-be immigrants were put in danger.