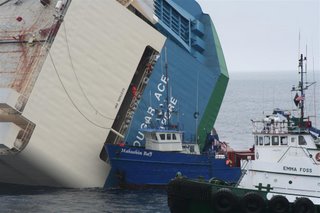 Sad news in that a naval architect taking part in the salvage survey of the Cougar Ace has died from injuries incurred when he fell on the stricken vessel as reported here and here:

"They were on the covered main deck and he slid down a considerable distance, somewhere in the range of 80 feet," said Charles Nalen, vice president of environmental safety quality assurance for Crowley Maritime, owner of Titan Salvage

Members of the salvage team were equipped with safety harnesses and clipped onto a safety line as they moved along the deck. "For some reason, he became disconnected from the safety line," Nalen said.

Our sympathy to his family.

Salvage personnel board the COUGAR ACE to assess the condition of the vessel. 7/30/2006 Photo Credit: USCG