Third Law of Sea Treaty Not in US interests?

Some interesting points about the Third United Nations Convention on the Law of the Sea, or UNCLOS III raised here. UNCLOS was adopted in 1982, but the U.S. Senate has not ratified the treaty. David A. Ridenour, Vice President of The National Center for Public Policy Research, expresses concerns over portions of UNCLOS III that would interfere with the Global War on Terror.

Among the flaws cited in the report is a provision that specifies that boarding of ships at sea is justified only if "there are reasonable grounds to believe that" the ship is engaged in piracy, engaged in the slave trade, or engaged in unauthorized broadcasting. It makes no mention of those ships engaged in the transportation of terrorists or weapons of mass destruction.

"As objectionable as unauthorized broadcasts - or even authorized broadcasts -- of Jessica Simpson or Brittany Spears might be, shutting them down isn't as important as apprehending terrorists and WMD," said David Ridenour, Vice President of The National Center for Public Policy Research. "Under the treaty, the U.S. wouldn't be able to act on intelligence information that Syrian, Iranian or North Korean ships is carrying terrorists or WMD without having to answer to the International Tribunal of the Law of the Sea (ITLOS). And since the majority of ITLOS judges come from countries that are either openly hostile to the U.S. or are at best unreliable allies such as Russia, China, Brazil, Tanzania and France, the prospects for rulings in the U.S.'s favor would be poor."
***
The "Ratification of the Law of the Sea Treaty: A Not So Innocent Passage" report also suggests that treaty could harm the United States' ability to set its own environmental standards and may even provide the means of forcing the U.S. to comply with the Kyoto Protocol, a treaty the U.S. has rejected.

"The Law of the Sea Treaty requires states to 'adopt laws and regulations to prevent, reduce and control pollution of the marine environment from or through the atmosphere,'" said Ridenour. "Since environmentalists argue that human emissions of greenhouse gases - 25% of which are generated in the U.S. - are causing climate change damaging to coral reefs, some environmentalists could use the treaty to compel the U.S. to comply with the Kyoto Treaty."
***
* The treaty would for the first time require all unmanned ocean vessels, including those used for mine detection to protect ships exercising the right of innocent passage, to navigate on the surface in territorial waters - effectively eliminating their value for such purposes.

* Potentially impede routine U.S. military operations at sea by stipulating "the high seas shall be reserved for peaceful purposes" and requiring that all parties to the treaty refrain from "any threat or use of force against the territorial integrity or political independence of any state." Under the Law of the Sea Treaty, the principal would enforcement body would not be the U.N. Security Council, where the U.S. holds a veto, but such bodies as the International Tribunal of the Law of the Sea and International Seabed Authority (ISA). The ISA's membership, like ITLOS's, does not favor the U.S. as it includes such countries as Sudan, China, Malaysia, Russia, Namibia and Myanmar (the name given Burma by its military junta).(source)

Some of the concerns expressed are a little overwrought in my opoinion. However, the sort of changes proposed in UNCLOS III appear to be mainly effective against the larger, more powerful maritime nations and continue a trend of chiseing away at the powers of such states to conduct legitimate military operations on the sea.

Recall the recent restrictions placed on RIMPAC naval exercises by a court injunction on the use of sonar and the settlement that followed? It appears that UNCLOS III would open the door to further litigation.

The economic side of the treaty is interesting, too as noted here in the Southeast Asian Programme in Ocean Lae, Policy and Managment SEAPOL Newsletter (MAr/April 2000):

One of the most active of the many “special interest” blocs at UNCLOS III was the grouping of landlocked and geographically disadvantaged states (LLGDS). The equitable redistribution of wealth was taken seriously as one of the primary purposes of that conference, and the developing LLGDS countries were intended to rank high among the beneficiaries of reform. Above all, the equity of UNCLOS III was concerned with the need to assist those landlocked countries that belong to the “least developed” category of nations, whose lack of a sea-coast aggravates their economic and commercial frustrations.
H.E.Phao Bounnaphol, Amb.Chaleune Warinthrasak & Dr.Phiphat Tangsubkul at the Opening Ceremony
The most conspicuous contribution of UNCLOS III to the cause of landlocked developing states was Part X, whose eight articles (Articles 125-132) re-affirm the principle of “freedom of transit” and their entitlement of access to the sea. Those familiar with Part V on the regime of the exclusive economic zone (EEZ) will also recall the purpose of Article 69, which is to affirm a landlocked country’s right to share surplus fishing stocks in the EEZ of coastal states of the same region or sub-region. It was also hoped that landlocked developing countries would benefit from the revenues generated from deep ocean mining beyond the limits of national jurisdiction and from the provisions concerned with the transfer of technology. But as the prospect of a deep ocean mining industry keeps receding, and with the dissipation of most of the energy associated with the New International Economic Order, hopes of ocean-based relief for landlocked developing countries rest more than ever with Part X and Article 69. Unfortunately, these provisions bristle with difficulties, so heavily qualified that enjoyment of the access-to-the-sea entitlement seems to depend on the benevolent discretion of the neighbouring transit country or countries.

The terms "equitable redistribution of wealth" and the "sharing" of "fishing stocks in the EEZ of coastal states of the same region or sub-region"- seem to pose the question of why national borders exist at all?

Who benefits from a "sharing" of coasts?

Human populations have a tremendous impact on the quality of coastal and oceanic environments. A full two-thirds of the world's population - 4 billion people - live within 400 kilometres of a seacoast. Just over half the world's population - around 3.2 billion people - occupy a coastal strip 200 kilometres wide (120 miles), representing only 10 per cent of the earth's land surface. With this population distribution, increasing human numbers and mounting development pressures are taking a grim toll on coastal and near-shore resources.

Among continents, only in Africa do more people live in the interior than along or near ocean coasts. But even in Africa demographic patterns are shifting. Over the past two decades, for example, Africa's coastal cities, as centres of trade and commerce, have been growing in population by 4 per cent or more a year, as they attract people from the countryside. Cities such as Lagos, Mombassa, Dar es Salaam, Accra, Abidjan, and Dakar have seen their populations expand greatly from in-migration and local population growth.(source) 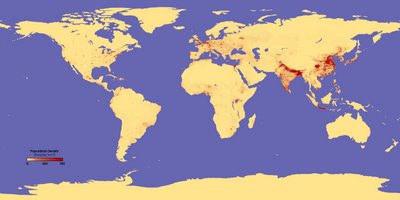 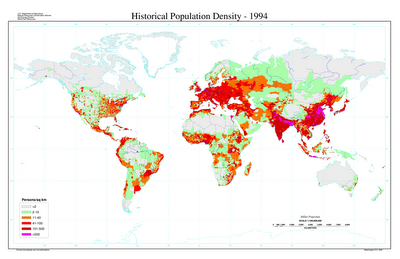 Take a look a the maps. The vast majority of humankind live in countries and locations near the greatest highways of mankind, the oceans. However, what is often overlooked is that people, even in those "landlocked" countries of Africa, also tend to cluster along navigable waterways. See the map on population density along the watersheds of the world (bottom map). The people are not "landlocked" in the sense implied by UNCLOS III in that they have access to the seas through the river highways. And they do thrive. As the site from which the watershed map comes states: "In Africa, the most densely populated basin is Lake Victoria, a subbasin of the Nile watershed." 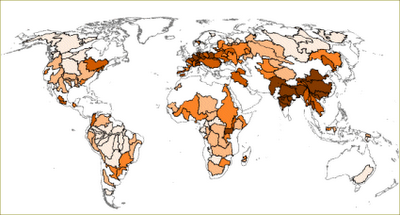