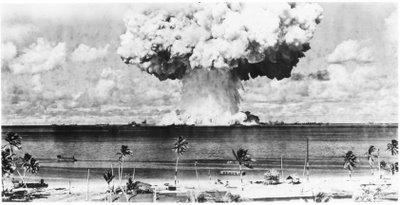 Reported as Rand: Port Blast Would Be Devastating.

You know, a nuke going off near any populated area will do the same or worse damage. I'm not sure where the news is here.

UPDATE: As long as we're working "port security", I suggest looking at this:

A new study of U.S. seaport security delivers a message that leaders and citizens may not want to hear: Because there is no foolproof way to protect America’s ports from a terrorist attack, current policies and programs need to focus much more on recovery and economic restoration. In a report released today by the Public Policy Institute of California (PPIC), a team of economists and maritime security experts looks at an array of security issues to provide one of the most comprehensive examinations of port security to date.

Given that 41 percent of U.S. international trade passes through the nation’s 361 seaports and that millions of American paychecks depend on this flow, how devastating would an attack be to the nation’s economy? The report’s chapters provide a range of estimates: At the high end, some of the authors argue that an attack on a major seaport such as Los Angeles-Long Beach could cost the nation tens of billions of dollars. However – if response and recovery is appropriate and sufficient – other authors find that the economic cost would be relatively small.
***
No matter what we do to protect the ports, it will not be enough to ensure – absolutely – against an attack at some location,” says PPIC program director Jon Haveman, who edited the volume with PPIC research fellow Howard Shatz. One of the report’s strongest recommendations is that comprehensive recovery plans be created specifically to reduce economic panic and to restore global supply chains quickly following a catastrophe. “How well government reacts to the problems caused by an attack is probably as important as how well it anticipates them,” adds Shatz. In fact, the authors also suggest that rigorous recovery plans can serve as a disincentive to terrorists, who have been shown to focus on targets where they can do the most damage—economic and otherwise.
***
[Protective] Measures would include continuing a “layered” defense whereby there are several tracking, screening, and inspection points for shipping containers as they flow from the foreign country’s factory gate, through the maritime domain, to U.S. shores; using multiple technologies such as radiation detectors and container tracking devices; steering government development of new technologies toward areas that the private sector has no incentive to pursue; strengthening emergency response at the nation’s ports; strengthening terrorism insurance markets; and reevaluating the level of overall port security funding and staffing for public entities that focus on port security, such as the U.S. Coast Guard.

You can download the Public Policy Institute of California report "Protecting the Nation's Seaports: Balancing Security and Cost" here. And the complete Rand report "Considering the Effects of a Catastrophic Terrorist Attack" here.