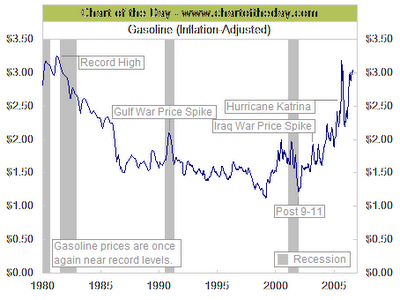 Chart of the Day says:

Over the last 24 weeks, the average US price for a gallon of unleaded has increased 65 cents per gallon and is near the 25-year high made last year in the wake of Hurricane Katrina. However, when adjusted for inflation, it is clear that gasoline prices still have a touch more to go before they reach the inflation-adjusted peak of $3.25 that occurred back in 1981. Stay tuned...

One part of our fuel bill has increased dramatically in real terms over the years: Taxes. Adjusted for inflation, state and federal taxes on gasoline have increased by 868 percent since 1922 — they were only 4 cents per gallon back then — and by 50 percent since 1981, when they were just 14.5 cents.

But even with the recent rise in gas prices, gasoline prices are rising at a slower rate than many other necessities.

A half-gallon of milk, for example, has increased from an average of $1.12 in 1981 to $2.09 last month. While milk prices have increased at a slower pace than inflation, they've increased at a faster rate than gasoline prices. Milk prices declined in real terms by around 18.6 percent, perhaps aided by federal government subsidies that the Progressive Policy Institute says amounts to $3.32 for each of America's 9 million dairy cows, while gasoline declined by a slightly more robust 18.9 percent. Where are the critics of Big Dairy?

Bread prices also have increased relative to gasoline since 1981. The price for a pound of white bread has increased by 103 percent — about 8 percent less than the inflation rate over the period. Where are the calls for a windfall profits tax on the makers of Wonder Bread?

Moreover, the price of a first-class postage stamp has risen from 18 cents in 1981 to 39 cents today — almost precisely keeping pace with the inflation rate.

And a really good point about a "necessity":

One needn't consult consumer price indexes to understand that gasoline isn't significantly overpriced. Consider, for example, how many Americans willingly pay $1 or even $1.50 for a 20-ounce bottle of drinking water. At $1, the price of that water is $6.40 per gallon — nearly 2.8 times the amount Americans paid for a gallon of gasoline last month.

UPDATE: Some state go out of their way to stick it to their residents. For example, check the North Carolina gasoline tax: