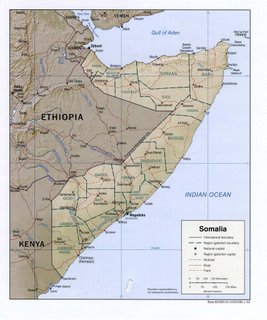 Mogadishu, the port, reopens as the Islamist "rulers" invoke memories of trains running on time. And the pirate port has been taken over. All reported here and here respectively.

In the meantime, Puntland and Ethiopia may or may not have troops in Somalia, drawing threats from the Islamists:

The spokesperson for the Islamic Courts Council said on Wednesday that
the presence of Ethiopian and Puntland troops in central Somalia regions to aid warlord Abdi Qeibdid must not be tolerated.

This is the first time the Islamists have shed light on exactly how Qeibdid left Mogadishu after his defenses were overran by the Islamists.

Sheikh Mudey said the ICC leadership talked with Puntland president Mohamud "Adde" Muse and the two sides agreed that Puntland would not cross into south Mudug region and the ICC promised to not enter Puntland-controlled areas.

"We will send our forces into Puntland regions if Puntland forces do not rereat from south Mudug," the ICC's information secretary warned.

Puntland sent hundreds of militias Wednesday to Bandiiradley village, which is located some 60 KM south of Galkayo, the capital of Mudug region.

Bill Roggio has much more on the other fun things unfolding in Somalia ("slide into the darkness of a radical Islamist state") here at the Counterterrorism Blog.