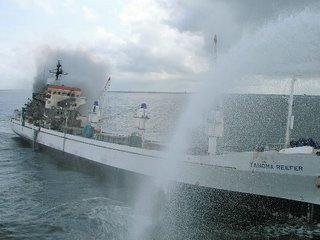 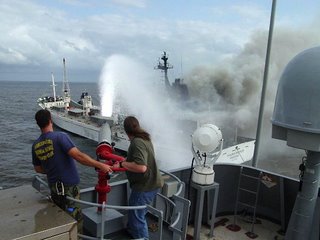 USNS Apache (T-ATF-172) helps out a commerical freighter which was on fire in Monrovia as reported here:

The engine room of Tahoma Reefer, an Estonian commercial freighter also paying a call on Monroviaís port, burst into flames in the early hours of the day. Later that morning, just as smoke from the burning vessel was spotted from Apacheís bridge, the U.S. Embassy in Liberia phoned the ship and asked the crew to respond. 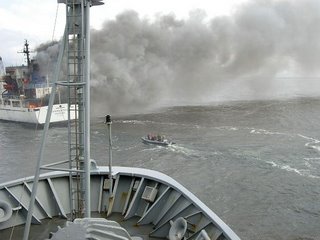 All photos fronm US Navy.

Crew members aboard the Military Sealift Command (MSC) fleet ocean tug USNS Apache (T-ATF 172) evacuate personnel from the commercial freighter Tahoma Reefer, while rendering assistance at sea. The fire broke out in Tahoma's engine room in the early morning hours of Aug 10, 2006. Apache rescued the freighter's crew and was able to bring the fire under control. Apache is in Liberia to conduct a harbor survey and do repair work on the port of Monrovia's pier as an ongoing effort to strenghten the United States emerging partnership with this nation. U.S. Navy photo