How Iranian rockets end up with Hezbollah 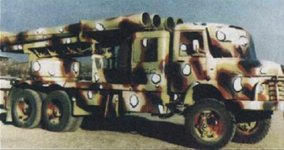 It's this uninterrupted flow of weapons, mostly made in Iran, under the nose of the Lebanese Government, that has allowed Hezbollah to stockpile some 12,000 Katyusha rockets. Over the past 29 days of conflict, Hezbollah has fired more than 3000 rockets into Israel.

Aside from rocket launchers, armoured personnel carriers, night vision goggles, aerial drones and motorised gliders make up the hardware for a 3000-strong guerilla unit that some say is in fact a well-organised and fierce military force.

"The fact that Hezbollah is difficult to dislodge from their positions is not a surprise for the Israelis or anyone else," David Schenker, a specialist in Middle East affairs at the Washington Institute for Near East Policy, tells The Australian. Schenker also worked for four years at the Pentagon as a Middle East specialist. "Hezbollah fighters are well trained and highly motivated and they are dug in," he adds.