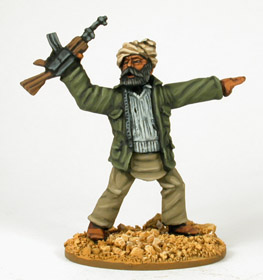 Smash has a post regarding the allegation that the KGB "armed and instigated radical Islamic terrorists" back in the 70's. I'm sure some will note with irony that the U.S. provided assistance to the Afghan mujahideen during the Russian incursion into Afgahanistan, a favor which, it is alleged, brought us Osama bin Laden and others of his camp (note: See comments - a disinction is being drawn between indigenous Afghan fighters who received U.S. aid and Afghan Arabs who received their aid from other sources, per this). I guess that also could qualify as stirring up "radical Islamist terrorists."

What neither Smash nor the "ironistas" will note is that stirring up the Muslim world to hurt your enemies while advancing your own cause was not invented in the 1970's but is a far older ploy. As Barbara Tuchman set out in her excellent book The Zimmermann Telegram, the Germans in World War I had an agent, Wilhelm Wassmuss, whose goal in 1915 was "to bring Persia (now Iran) into the war on the German-Turkish side (for a look at how Turkey came to join the Germans, see here).

For years the Kaiser had hankered after his Berlin-to-Baghdad dream, and now his empire-builders saw themselves ending Anglo-Russian domination of Persia, swinging all Islam behind the Central Powers, bringing in Afghanistan after Persia, and ultimately marching triaumphantly into India. More immediate strategy required the cutting of the Anglo-Persian pipeline.

His first objective was the Bakhtiari tribes through whose territory ran the Anglo-Persian pipeline. [then, as now, "it was all about th OIL!"] On February 5, the pipeline was cut, though it seems doubtful if it was at the instigation of Wassmuss...Shortly afterward he passed through the maret towns of Dizful and Shushtar, conferring with tribal chieftains and distributing his pamphlets inciting them to a jihad or holy war against Britain as the enemy of Islam's Caliph, the Sultan of Turkey.

Tuchman also note the role of Major Lawrence of the British Army, whose goal was to "swing Turkey's Arab subjects over to the British."