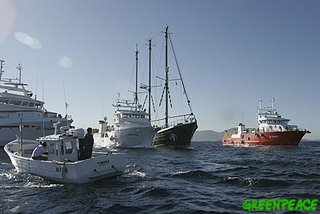 Greenpeace gets a dose of its own medicine as reported here:

The arrival of Greenpeace’s flagship sparked a blockade by angry French tuna fisherman, a legal row and a veiled threat of violence if Greenpeace tried to remain in the waters off Marseilles for more than a few hours.

As Rainbow Warrior II approached the port to highlight what campaigners say is the destruction of the bluefin tuna population, at least 21 fishing boats surrounded her.

“This is an illegal act, breaking several laws,” Pierre Ramel, Greenpeace director of campaigns, said. Opponents pointed out that Greenpeace had used similar tactics before.