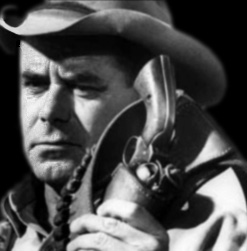 
Ford interrupted his film career to volunteer for duty in World War II with the United States Marine Corps Reserve on December 13, 1942. He was assigned in March 1943 to active duty at the Marine Corps Base in San Diego. He was sent to Marine Corps Schools Detachment (Photographic Section) in Quantico, Virginia, three months later, with orders as a motion-picture production technician. Promoted to sergeant, Ford returned to the San Diego base in February 1944 and was next assigned to the radio section of the Public Relations Office, Headquarters Company, Base Headquarters Battalion. There he staged and broadcast the radio program Halls of Montezuma. Ford was honorably discharged from the Marines on December 7, 1944 for duodenal ulcers that had him hospitalised for several months.[7]

In 1958, he joined the U.S. Naval Reserve and was commissioned as a lieutenant commander and made a public affairs officer. During his annual training tours, he promoted the Navy through radio and television broadcasts, personal appearances, and documentary films. He was promoted to commander in 1963 and captain in 1968.

Ford went to Vietnam in 1967 for a month's tour of duty as a location scout for combat scenes in a training film entitled Global Marine. He traveled with a combat camera crew from the demilitarized zone south to the Mekong Delta. For his service in Vietnam, the Navy awarded him a Navy Commendation Medal. His World War II decorations are as follows: American Campaign Medal, Asiatic-Pacific Campaign Medal, World War II Victory Medal, Rifle Marksman Badge, and the US Marine Corps Reserve Medal. He retired from the Naval Reserve in the 1970s at the rank of captain.[8]

One of my favorite actors. Rest in peace.