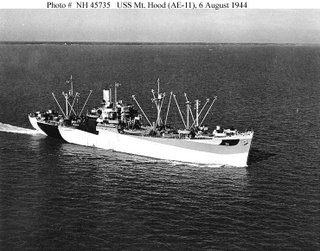 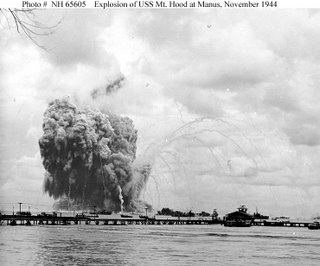 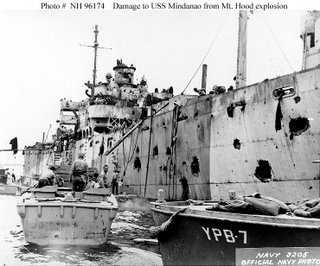 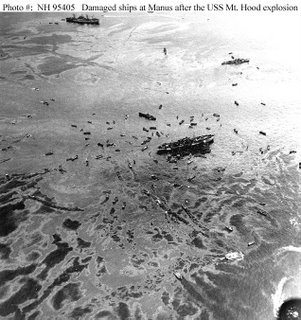 As I have noted before, the U.S. Navy rearms, refuels and resupplies at sea using a technique known as underway replenishment. Oil gets delivered by oilers, food and other stores by combat stores ships and ammunition by - ammunition ships.

Surprisingly, given their cargo, the safety record of these ammo ships has been pretty good. Sadly, however, their record is not perfect. During WWII, the Navy lost a couple of these ships including USS Mount Hood (AE-11). As set out here, AE-11 was built as a merchant hull and converted to an ammo ship:

Commissioned in July 1944, she transited the Panama Canal in August and was assigned to the South Pacific area to provide ammunition to the fighting forces. On the morning of 10 November 1944, while she was moored at the Manus Naval Base, Admiralty Islands, Mount Hood's cargo of explosives detonated in a massive blast. The ship was utterly destroyed by the accident, which killed all those on board her. Damage and casualties were also inflicted on ships anchored as far as 2000 yards away. Personnel casualties on Mount Hood and on other vessels totalled 45 known dead, 327 missing and 371 injured.

Of course, there was an official Navy investigation (reported at this very good site) that suggests that the explosion was likely due to unsafe ammo handling procedures:

Since the possibility of enemy action appears to have been remote, the most probable cause of the accident was rough handling of the ammunition while loading or unloading. The propagation of the explosion was undoubtedly increased by inadequate separation and segregation of incompatible items in stowage. Evidence indicates the possibility of the detonation of TPX loaded depth bombs while it was being loaded into the number three or number four hold. Detonation could have been caused by striking the hatch with the bombs on the way down or dropping them into the hold carelessly.

The following unsafe conditions and practices were revealed by the investigation:

1. That ammunition was being roughly handled in all parts of the ship.

2. That boosters, fuzes, and detonators were stowed together in one hold in a manner contrary to regulations governing transportation of military explosives (USCG NavCG 108).

3. That broken rockets form which some of the powder was spilled had been stowed in two of the holds.

4. That safety regulations for handling ammunition were not posted in conspicuous places about the ship and there was a general lack of instruction to the crew in safety measures.

5. That pyrotechnics and napalm gel incendiaries were stowed in an open temporary wood and tar-paper hut on deck under hazardous conditions near the hatch to number four hold.

6. That there was evidence that fuzes, detonators, and other ammunition were accepted on board which were definitely defective and should have been destroyed or disposed of by dumping in deep water.

7. That the fire hose was not laid out. There was evidence that fire drills were infrequently held.

8. That there was a lack of enforcing the prohibitions of smoking in boats alongside the ammunition vessel.

Given that no one on the ship survived, I suspect the list of causes was simply a generic list, the sort of things which could cause the explosion or slow the fighting of a fire if one began. However, as a former AE sailor, I can assure that the safe handling of ammo is not something you ignore.

As set out at the same site, some other eyewitness accounts include a submarine attack and an attack from the air. And there is this:

"For some unknown reason, Mt. Hood had been anchored in the midst of the ships of the Seventh Fleet Service Force. Casualties to other vessels would have been minimized if the ammunition ship had been spotted at an isolated location a few miles down harbor, off the ammunition supply depot at Lugos, the customary anchorage for ships of this type. Somebody was at fault for designating an anchorage for Mount Hood so near to the other ships."

It should be noted at a dozen or crewmembers did survive because they were off the ship:

Lieutenant Wallace, a Naval Reserve officer and a native of Atlanta, Georgia, recently was ordered back to this country. The only surviving officer of the Mount Hood, he told a few details of the explosion.

"We went ashore about 0830 (8:30 A.M.) and were walking up the beach when a sailor, with a startled look in his eye, screamed: 'LOOK!', and pointed to seaward. There was a flash, followed by two quick explosions. We were knocked down, but scrambled to our feet and got back in the boat.

"We headed toward the Mount Hood. There was nothing but debris all around, so we returned and reported to the Commanding Officer of the base what we had seen, and helped him as much as we could in trying to find out what happened. I guess no one ever will know what really happened. She just blew. We had never had an explosion of any kind on the Mount Hood before that."

It would only take one.

To the dead, the wounded and the brave men who continued to sail the ammo ships of WWII and the ones who have sailed them since, a salute.