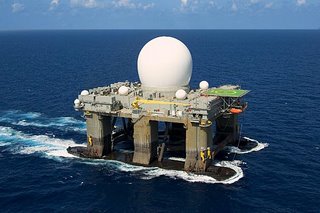 he giant radar, so powerful it can tell which way a baseball is spinning 3,000 miles away and so cutting edge it has been billed as the nation's best chance at comprehensive missile defense, came to the historic port of Pearl Harbor for what was advertised as a quick stopover for minor repairs and a paint job.

That was eight months ago.

Now, even as the weeks pass and the price tag creeps toward $1 billion, the Sea-Based X-Band Radar shows little chance of actually making the voyage to its intended port in Alaska - considered the optimal location for monitoring potential North Korean missile launches - until at least later this fall.

Murdoc has links to more here.