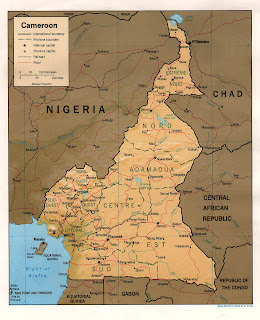 Reported here, bank robbing pirates from the sea in Cameroon:

A group of unidentified armed robbers stormed Limbe in the wee hours of September 28, killed one, wounded many and carted away several millions from AMITY Bank.The robbers, who reportedly came by sea, succeeded to escape under the cover of intensive gun fire.

The entire article is worth reading.

It's an interesting story and reminds me that Blackbeard and other pirates often attacked cities during their piratical careers, as noted here.
Posted by Mark Tempest at 9/30/2008 07:11:00 AM