CDR Salamander: Fullbore Friday with a short but too familiar note.

Been a busy week, but a GREAT way to start the weekend is to read Fred Fry's Maritime Monday 127 featuring the Maersk line and setting you up for next Monday - so you can now enjoy two working days of reading about maritime stuff!

Also at gCaptain- the M Ship Stiletto goes to war - the drug war. 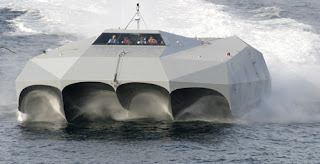 The Pentagon’s high-speed, shallow-draft “Stiletto” ship, designed and built by M Ship Co., LLC, completed a successful 6,000 nautical-mile deployment on a drug interdiction and apprehension mission in the waters off Colombia, the Bahamas and the Florida Straits. The deployment was capped off by a dramatic, high-speed chase of a “go-fast” boat in shallow waters near the Florida coast that resulted in the apprehension of three suspected smugglers.
***
The chase lasted more than two hours at speeds between 40 and 50 knots. When the smugglers realized they could not outrun the Stiletto, they headed for shallow sand bars and reefs, not realizing the draft of the intimidating-looking ship was just 2.5 feet. 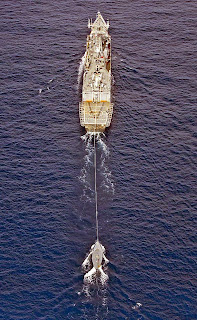 For those of you pondering naval strategy, Steeljaw presents the latest issue popping up (literally), the Russian SLBM Developments.

UPDATE: Add to your list of groups upset or "concerned" about Somali pirates: chemical shippers, Republic of the Philippines, shipowners and maritime unions...
Posted by Mark Tempest at 9/19/2008 09:30:00 AM