Russia: Another effort to expand- the Sea of Okhotsk 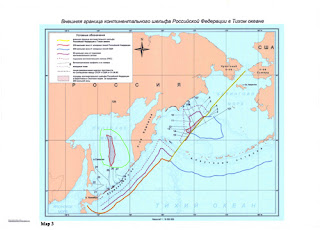 Steeljaw was kind enough to send along a link to this article reporting on Russia's continuing effort to claim rights over the Sea of Okhotsk and points east using the United Nations Convention on the Law of the Sea (UNCLOS):

Russian geologists intend to prove that the Sea of Okhotsk's central enclave, as well as all its other parts excluding a small piece in the south belong to Russia, a Russian tabloid wrote Monday.

Moskovsky Komsomolets said the question concerns 56,400 square kilometers (21,780 square miles) of deepened continental shelf under the Sea of Okhotsk, a part of the western Pacific Ocean, which is legally beyond the 200-mile Russian economic zone.

In 2001, Russia addressed the UN continental shelf commission with a similar request, which was turned down at the time. The UN demanded more data and evidence that the enclave is a continuation of the continental shelf, said Viktor Poselov, a deputy director of the ocean and geology research institute.

The Federal Agency for the Management of Mineral Resources and the institute sent a new special expedition to the Sea of Okhotsk to gather evidence for Russia's claim. Poselov said the collected data clearly indicates the sea is Russian territory with only some of the Kuril Islands being under dispute.

Russia's 2001 filing can be found here. The map was part of that filing. I've circled the central area of the Sea of O in green.

The Japanese response (here) focused on the disputed islands and on-going discussions between the Russians and Japan concerning the "Four Islands" that are the center of the dispute and by which the Russians attempt to expand eastward.