The United States Navy has undertaken a public relations offensive :

Senior Officers from the U.S. Navy, Marine Corps and Coast Guard have presented the new maritime strategy known as "Cooperative Strategy for 21st Century Seapower" to business and community leaders in cities nationwide as part of their "Conversations with the Country" program

There may have been other sessions held before the release of the "Cooperative Strategy" because the Navy says that citizen participation played a role in the drafting of the strategy:

"Our citizens were deeply involved in development of this strategy through a series of public forums known as the "Conversations with the Country." Three themes dominated these discussions: our people want us to remain strong; they want us to protect them and our homeland; and they want us to work with partners around the world to prevent war."

I attended yesterday's session and sat among the "business and community leaders" who had been invited to the conversation.

It was refreshing to see the Navy, Coast Guard and Marines out reminding people that we are a maritime nation, that our Navy faces a deficit in combatant ships (we have 279, the minimum we need is 313 along with the sailors to man 34 more ships) and that the Marines, Navy and Coast Guard provide a defense in depth for our national security.

That the presentation was slickly presented, included tons of nice handouts and good presentations by the Commandant of the Marine Corps and others was a bonus. It was a clever "lite" version of a survey course called "Introduction to Strategy."

It is my view that it was not designed to overwhelm those in the crowd unfamiliar with maritime matters with details. Many topics got brief mentions or touches- "sea bases," strategic sea lift, sea lines of communication, hybrid war, long war, the "Africa Station" concept and the push forward of humanitarian aid all got tossed out, but were not all discussed in depth. Considering the time constraints this probably should not be surprising.

Was it a conversation? Well, ordinary citizens did get to ask questions and mostly have them answered. A couple of young people (at least one high school student) got to ask about maritime issues and some apparent Congressional liaison types got to remind Navy leaders that budgets have long lead times...

How successful is the presentation? From among those in the crowd who were not veterans of the sea services (and perhaps from some who were) came questions asking "How can we help?"

I mark that as a success.

I wish the answers had been a little stronger instead of just "Write your Congressman," -- there should have been something like join the Navy League (the services should invite the local Navy League, Marine Corps League and the Coastie equivalent and introduce them), tell people to invite their Congressman to speak on maritime matters (that will keep such matters on his/her mind) and having the ability of interested people to sign up to get training to take home to their Rotary Club luncheons...

Ultimately, it was good for what it was. If you went seeking to debate the new strategy with its authors, well, this was not the forum. For reminding people about the sea services, it was perfect.

I do give the maritime services a "well done" for working to get their strategic vision out before the public in a time when ground combat dominates the news cycle.

On a personal note, Galrahn of Information Dissemination was able to twist my arm to have a couple of beers (well, we both had more than a couple) afterward. Look for his take on the event, and I know he was granted some unusual access during the sessions... 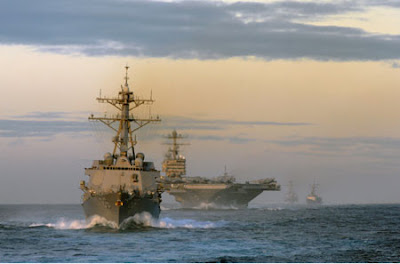