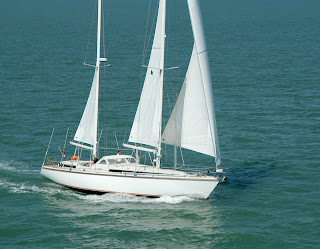 Some group of the Somali pirates may have found a nefarious use for the French yacht they captured a few days ago, as set out here:

YachtPals just received a warning from Andrew Mwangura of the Seafarers Assistance Programme (SAP) in Kenya to ALL VESSELS NEAR THE HORN OF AFRICA. The Amel Super Maramu Carre D'as IV, captured by Somalian Pirates a week ago, may be under use as a decoy vessel attacking other ships. The SAP warns that the vessel likely is or will be used to signal ships at

sea as being under distress, while hiding a speedboat from view of any ships responding to the rescue. Mwangura says that a small attack vessel of the type that can hide behind the Carre D'as IV "usually carries 5-7 heavily armed attackers (equipped with bazookas, assault guns like AK47, G3, FAL, M16 plus RPG - rocket propelled grenade launchers, as well as hand-grenades and/or mines). Such attack-boats do deliver a swift and heavy assault."
***
Andrew Mwangura told YachtPals that the pirates have made unusual demands for the release of these latest hostages: "The Somali hi-jackers of the couple demand for the release a sum in excess of 1.4 million US dollar and the return of the 6 Somali prisoners, which the French Navy had taken after the negotiated and paid-for release of the French Luxury Yacht Le Ponant." These accused pirates have been facing trial in Paris since capture.

Looks like one way to eliminate some pirates would be to blast the captured yacht, leaving smoke on the water...