A man claiming to speak for pirates holding a Ukrainian ship laden with tanks said Saturday that they want US$35 million for its release. It was not immediately possible to confirm the claim by Ali Yare Abdulkadir, or his status.

Speaking by telephone with The Associated Press, he said the pirates want to negotiate with the Kenyan government, and he warned against any military action to release the ship.

He would not reveal his whereabouts. The tanks aboard the ship, which was hijacked Thursday, were ordered by Kenya. Kenyan Defense Department spokesman Bogita Ongeri said on Saturday that Kenyan authorities have had no contact with the pirates who seized the vessel and its cargo, and have not received any demands for ransom.

Ongeri said that the Ukrainian vessel was seized in international waters in the Gulf of Aden. He said that the pirates hijacked the ship beyond 200 nautical miles (230 miles, 370 kilometers), away from the coast of the northeastern Somali region of Puntland. Two hundred nautical miles in maritime law mark the end of a country's territorial waters.

Ukraine's defense chief said Friday that the Faina was carrying 33 Russian-built T-72 tanks and a substantial quantity of ammunition and spare parts. Russia's navy said it dispatched a warship to the area, and the United States said U.S naval ships were monitoring the situation.

Another report on this ship contained in this:

A man who spoke to the Associated Press in Somalia by telephone and claimed to be a spokesman for the pirates said they were seeking a ransom.

"We want the Kenyan government to negotiate with us about a $35 million ransom we want for the release of the ship and the cargo without any other intervention," said the man, who identified himself as Ali Yare Abdulkadir. "If not, we will do what we can and off load the small arms and take them away."

Abdulkadir, who local residents in the northeastern Somali region of Puntland said represented the pirates, declined to reveal his whereabouts. He said the ship is somewhere along Somalia's northeastern coast and warned against any military action to liberate it.

"Any one who tries it will be responsible for the consequences," Abdulkadir said.

A Russian Web site posted on Saturday what it said was an audio recording of a telephone conversation the Ukrainian ship's first mate. He said the hijackers are seeking a ransom and have anchored close to the Somali shore.

There was no way to immediately confirm the authenticity of the report on Web site Life.ru. Calls to the phone number listed on the site went to an answering machine at the publisher of two established tabloids that have reportedly reliably on news in the past — one of them also called Life.

On the recording, a man who identified himself as first mate Vladimir Nikolsky said the hijackers were asking for a ransom but he did not know how much. Life.ru showed images of what it said were the Russian passports for both Nikolsky and the ship's captain, Vladimir Kolobkov.

Nikolsky said the Faina was anchored near the Somali town of Hobyo and that two other apparently hijacked ships were nearby. Most of the 35 people on the ship — 21 of them crew — were being kept in a single room, he added.

Ukrainian officials had said there were 21 people aboard — 17 Ukrainians, three Russians and a Latvian.

Nobody aboard the Faina was injured, but the captain was suffering from heatstroke and his condition was "not so good," the man identified as Nikolsky said. It was unclear exactly when the purported conversation took place. 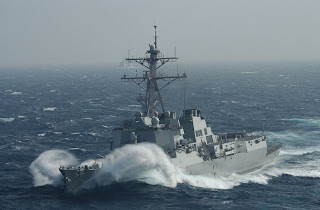 A U.S. Navy destroyer seems to be keeping an eye on the Faina, as set out here:

A U.S. defense official said the destroyer USS Howard is pursuing the hijacked Ukrainian vessel and is now within a few thousand yards of it. The hijacked ship is anchored a few miles off the Somalia coast, said the official who spoke on condition of anonymity due to the sensitive nature of the situation.

The destroyer is watching to make sure the pirates do not try to remove anything, the official added.

Howard website. Post on Russian frigate enroute here. It won't be in the area for a couple of days...

UPDATE2: In the meantime, a Japanese ships has been released after a $2 million dollar ransom payment, according to this.

UPDATE3: And an Egytian ship also has been released.

UPDATE4: The Kenyans, for whom the tanks were intended, have apparently dispatched 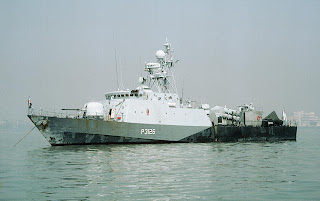 their navy toward the captured Ro-Ro as set out here:

All branches of the Kenyan Armed Forces were on full alert on Sunday night and heading for a showdown with the pirates who seized a cargo ship carrying battle tanks for the army.

The Navy put to sea and was racing to take up position in a joint operation to recover the hijacked Ukrainian cargo vessel, which was also carrying arms and ammunition.

“All branches of the military are working with partners to solve the problem,” said a senior government official, who did not wish to be quoted discussing an ongoing, security operation. 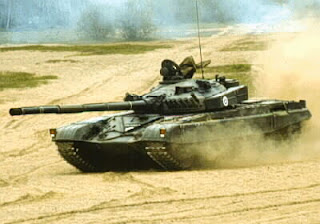 The official would not say which units were involved and what actions they were taking.

The Forces were ordered into action even as a heavily armed Russian warship entered Somalia waters and was preparing to rescue the crew of 17 Ukrainians, three Russians and a Latvian aboard the hijacked ship, the MV Faina.

A United States warship was also in the area and said by Pentagon officials to be tracking both the Faina and the Russian missile frigate, the Neustrashimy.

Warning France and the United States, which have warships in the area the Faina was seized - in the Gulf of Aden as it opens into the Indian Ocean - the pirate spokesman said: "Anything that happens is their responsibility."

He said the ship's crew initially fought against the pirate assault, but the attackers, estimated to have been about 100-strong, eventually succeeded in using "tactical manoeuvres" to overpower the crew.

An aide to the Faina's captain told a Moscow news service in a satellite call from the ship's bridge that the vessel is anchored offshore, as the pirates await answers to their ransom demand, and that none of the crew had been injured in the attack or subsequently harmed.