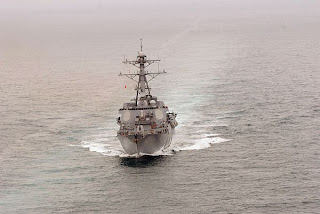 The U.S. Navy bolstered its force of warships off Somalia on Monday, intensifying its watch over Somali pirates holding a hijacked Ukrainian-operated vessel with crew members, arms and tanks aboard.

Lt. Nathan Christensen, a spokesman for the U.S. Navy 5th Fleet, said "there are now several U.S. ships" within eyesight of the hijacked ship, Faina, which was bound for Kenya when it was seized last week.

Speaking by telephone from Bahrain, Christensen declined to say how exactly many other U.S. warships had joined the USS Howard, a guided-missile destroyer, off Somalia. The U.S. ships were staying in international waters off Somalia, Christensen said, while the Somali pirates kept the Faina within the 12-mile territorial bounds of Somali waters.

U.S. sailors remained close enough to see the ship, and had established bridge-to-bridge contact via radio, he said.

A report that the "watch" includes a helicopter gun ship here. Report that a helicopter is being used to stop resupply by the pirates from shore here:

Andrew Mwangura, of the Kenyan-based Seafarers' Programme, said the Faina was sitting a few miles off the Somali coastal village of Hinbarwaqo on Monday, closely monitored by the USS Howard which had come close enough for visual contact. 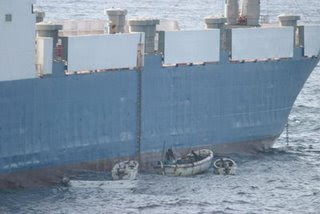 "They cannot attack because we think there are dangerous chemicals on board too," he said.

A helicopter, probably U.S., had been buzzing over the Faina to prevent people on shore reinforcing the vessel.

"Ten small boats were headed to the ship yesterday. But they went back when the chopper buzzed them," Mwangura said.

"With the helicopter and the Howard watching them, the tactic is clearly to scare the pirates."

Kenya also rejects the idea that the tanks were meant for southern Sudan:

Kenya reacted angrily to suggestions, by the Seafarers' Programme and some anonymous military sources, that the Faina's military cargo was headed secretly for south Sudan.

"There have been alarming propaganda by the pirates to media that the weapons are not for the Kenyan Military. This is a tactic by the terrorists to try and fend off reprisals against them," government spokesman Alfred Mutua said.

"The Kenyan Government will not engage in answering back to terrorists who have hijacked important military equipment paid for by the Kenyan tax payer for use by the Kenyan Military."

UPDATE: It is unclear about the timing, but a U.S. Navy spokesman says differently:

A U.S. Navy spokesman says a weapons shipment on a Ukrainian ship hijacked by Somali pirates was headed to Sudan, not Kenya.

Lt. Nathan Christensen, a deputy spokesman for the U.S. 5th Fleet in Bahrain, says the buyers in Sudan are unknown.

A 5th Fleet statement Monday says the ship was headed for the Kenyan port of Mombassa, but that "additional reports state the cargo was intended for Sudan."

Kenya has claimed it was the buyer for the shipment, which includes T-72 battle tanks.

The U.N. has imposed an arms embargo on weapons headed to Sudan's Darfur conflict zone. But the ban does not cover other weapons sales to the Khartoum government or the southern Sudan's autonomous government.

UPDATE2: UN Resolution re arms to Dafur explained here. You can download your very own copies of UN Resolutions 1591 and 1556 here.

UDPATE3: Was the hijacking of this ship an "inside job?" That question posed here:

A MYSTERY grew today as to whether pirates who hijacked a Ukrainian ro-ro last week might have had prior knowledge about the ship's route and cargo of battle tanks – and help in seizing the vessel.

MV Faina, which is carrying a cargo of 33 Ukrainian T-72 tanks and related equipment, was sailing much closer to the Somali shore than security rules dictate when it was boarded by pirates aboard small boats on Friday.

Suspicions also mounted because no convoy or armed guards were protecting the Kenyan-bound vessel.