Somalia: What the Russians are sending 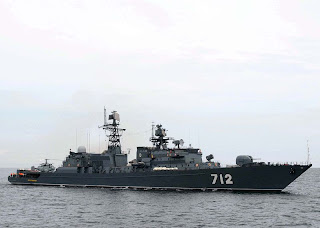 According to this, the Russians have dispatched a frigate from their Baltic fleet to go to Somalia:

Russia's navy has sent a warship to Somalia's coast to combat pirates and will mount regular anti-piracy patrols in the area, a navy spokesman told Russian state television on Friday.

The announcement underlined the ambition of Russia's navy, which some observers say is being used by the Kremlin to project its renewed power. Russian ships are also sailing to Venezuela for the first major manoeuvres in the area since the Cold War.

"In the future, the Russian navy will send its ships on a regular basis to zones where there is a danger from maritime piracy," navy spokesman Igor Dygalo told the Vesti-24 television station.

"This is being done to defend the lives of Russian citizens, should such a danger appear, and to ensure the safety of shipping."

He said the Russian frigate "Neustrashimy" -- or "Fearless" -- left its base on the Baltic Sea on Sept. 24 heading for the area off Somalia's coast to tackle pirates operating there.

Russian officials deny there is a political motive behind the navy's missions far from Russian shores, saying that the new funding means they can now resume operations which are routine for most of the world's major navies.